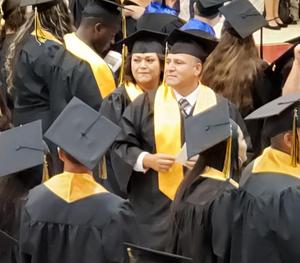 Hugo Rosales delivers emotional speech during event on Friday.
Lucerne Valley siblings Hugo and Elizabeth Rosales were among 250 adults to receive their high school diplomas during Friday’s Victor Valley Adult Education Regional Consortium graduation ceremony at Victor Valley Community College.
Altogether, according to keynote speaker State Senator Scott Wilk, there were 470 who would receive their high school degrees, with the oldest being 83 years old.
Wilk said there were three sets of siblings, two cancer survivors — one had cancer in high school which prevented graduation at that time — one blind student, one deaf student and three married couples.
“Today is not the ending,” Wilk said. “It’s just the beginning.”
Hugo Rosales, who was among six Lucerne Valley Adult Education Program students, was his group’s chosen speaker. He thanked the Apple Valley Adult Education staff and Nancy Monson and Kim Anderson from the Lucerne Valley program.
“They have inspired me to achieve this goal,” Rosales said of Monson and Anderson during his speech.
Adult responsibilities can present an obstacle for adult back to school, Rosales said. “Every day lives was just work, work, work.” Thanks to his supporters, he persevered and completed his goal: “Finish the most important thing in life — to get your education.”
An emotional Rosales also credited his older sister for inspiring him and his younger sister, Elizabeth, for her energy, example and strength. “She took that journey with me, and she’ll be graduating also. Getting this diploma is the beginning of a new life for me.”
Rosales ended his speech with a quote by C.S. Lewis: “You are never too old to set another goal or to dream another dream.”
Lucerne Valley Adult Education teacher/facilitator Monson credited students like the Rosales siblings for demonstrating commitment to take one of the biggest steps in their lives.
“Real courage is accepting mistakes you’ve made and taking the risk to change your life,” Monson said. “Every one of our graduates from Lucerne Valley Adult Education trusted their heart and worked to change their lives. The importance of graduation is not just to recognize an accomplishment, but also to open new doors to their futures. I am so proud of these graduates and I’m proud to be a part of this program.”
Besides Hugo and Elizabeth Rosales, Lucerne Valley Adult Education students Liliana Ramos, Tawnya Dillon, and Rex Modica will receive their degrees. Student Brianna Mata will graduate in August 2019.
Friday’s graduation ceremony was attended by numerous family members, supporters and local dignitaries. Five local high school districts comprise the consortium, which was formed in 2014. The school districts are Apple Valley Unified, Hesperia Unified, Lucerne Valley Unified, Snowline Joint Unified and Victor Valley Union High School School District.
VVC President Dr. Dan Walden greeted guests and introduced the Victor Valley High School Air Force Jr. ROTC, which served as the event’s color guard.
“You are all examples of your district’s vision and mission for this Victor Valley region,” Walden said. “You have achieved your goal, and today we celebrate with you.”
Of the speakers, a graduate from VVC Adult Education gave perhaps the most dramatic speech. A single father of two daughters, the Barstow College student said, “I’ve watched young mothers study with a book in one hand and a baby in their other.”
“It’s a choice I make in my life,” he said. “I make the choice every day, a choice we made to not give up. We are all here because we chose to better ourselves.”