Debbie Cosato given commendation for 25 years of service 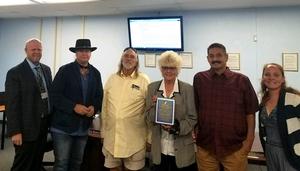 Retired lead custodian receives award with husband John, former supervisor Cindy Lattin-Oliveira and former co-workers in attendance.
By Peter Day
Longtime Lucerne Valley Middle High School lead custodian Debbie Cosato, who retired at the end of the 2018-19 school year, was honored at Thursday’s school board meeting for 25 years of dedicated service.
“Debbie was truly dedicated to the district,” Superintendent Peter Livingston said. “Whatever was needed she did. Debbie is truly committed to our district.”
Debbie and her husband John, a local barber, moved to Lucerne Valley in 1990. Soon after arriving, their home burned down. But the town — and her coworkers — were there to lend support. A few years ago, Cosato was diagnosed with Non-Hodgkin’s Lymphoma, but the person with the ever-present smile continued working. Helping students, staff and her campus were priority No. 1.
On Thursday, with her husband John, former supervisor Cindy Lattin-Oliveira and other friends and supporters in attendance, Debbie Cosato gingerly walked to the front to receive her commendation. Once again she flashed her bright smile and made some sunshine.
Peter Day currently is a social media advisor for the Lucerne Valley Unified School District.
————————
Longtime lead custodian Debbie Cosato received a special award from the Lucerne Valley Unified School District for 25 years of dedicated service. Pictured, from left, Superintendent Peter Livingston, LVUSD Board President Jim Harvey, board member Tom Courtney, Cosato, and board members Ruben Medina and Jessica Risler. Photo by Doug Beaton