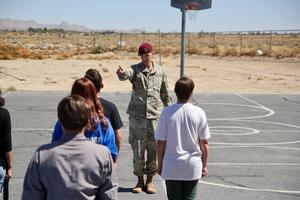 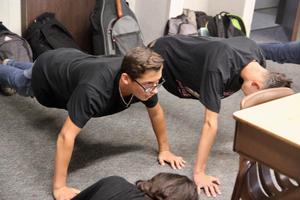 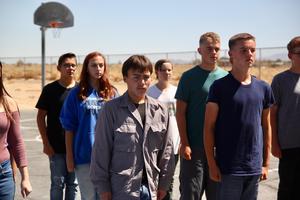 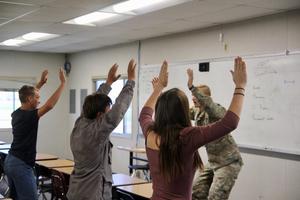 The California Cadet Corps was founded in 1911, and several units are based in the High Desert.
By Peter Day
“Left, left, left, right. Left, left, left, right….”
These sounds of marching drills aren’t coming from Fort Irwin National Training Center outside of Barstow or another nearby military base. Instead, the voice of an otherwise typical Lucerne Valley High School student is directing his classmates in lockstep around a basketball court.
Barely a month old, Lucerne Valley’s new California Cadet Corps program taught by Capt. Jared Blevens is already giving students a sense of direction and purpose. While initial tasks may seem basic, they are teaching the 20 high school students and 32 middle school participants that small things can build into great things.
“Though the course is in its earliest stage, I’ve already seen a tremendous amount of growth regarding discipline and leadership,” said Capt. Blevens, currently serving in a reserve capacity after five years of active duty. “The students are filling leadership positions in the class and we are slowly working to the goal of being a completely student-run classroom.”
Recently a visitor observed as Capt. Blevens put the high school class through its paces with some “PT,” otherwise known as physical training. Both boys and girls successfully completed regular toes-on-the-ground pushups followed by a set of knee-bends.
“PT has been an opportunity for the cadets to display their leadership and team skills. There have been several instances of cadets encouraging one another to make sure everyone is performing to the best of their abilities.”
Blevens, a tall, blond-haired man with eyes of conviction, is an infantry officer who received his commission through Officer Candidate School at Fort Benning, Georgia in July, 2015 and branch qualification from Infantry Basic Officer Leader’s Course (IBOLC) in the same year.
The California Cadet Corps was founded in 1911 by Brigadier General Edwin Alexander Forbes. Originally started to prepare commissioned officers for military service, the program evolved. Today, the Cadet Corps is in numerous schools across the country and its primary objective is to instill citizenship, patriotism, promote academic excellence and develop leadership.
Lucerne Valley Unified is the fourth local school district to become a member of the California Cadet Corps 18th Brigade. In a few weeks, Lucerne Valley will join other 18th Brigade groups from Barstow, Silver Valley and Riverside Preparatory Academy in a two-day field training exercise that teaches Cadets the principles of survival and military skills like fire and shelter planning.
Fundraising has begun for the program’s T-shirts, which students designed with Capt. Blevens’ input. Students are also arranging for a local T-shirt manufacturer to print the artwork on T-shirts. Capt. Blevens expects the Lucerne Valley Cadets to receive their uniforms next month.
For some Lucerne Valley cadets, the program could pave the way for a military career. Two in particular have expressed interest. Moreover, anyone who chooses to join the military will find many more opportunities, he said.
Capt. Blevens, who received his bachelor’s degree in history from Ashland University, says those who join can have a college education or training program paid for by the military. An increasing number of vocational opportunities are technology based, which opens doors after military service.
“You can work behind a desk if you want.”
Whatever the high school students choose to pursue after high school, the Cadet Corps can give Lucerne Valley students a group of like-minded school friends, much like the popular Lucerne Valley FFA program.
“There’s not a lot for kids to do out here,” Capt. Blevens said. “The Cadet Corps gives them a sense of identity.”
Peter Day currently is a social media advisor for the Lucerne Valley Unified School District.