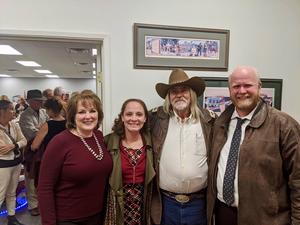 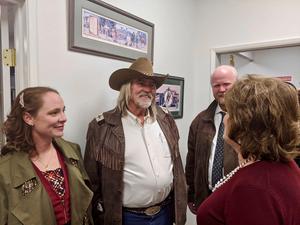 Board President Courtney, Vice-President Risler and Superintendent Livingston attend the Senator’s open house in Yucca Valley.
YUCCA VALLEY, Calif. — The Lucerne Valley Unified School District’s school board president, vice-president and superintendent were honored to attend State Senator Shannon Grove’s open house in Yucca Valley on Tuesday, December 17.
“What a pleasure in California being a small school district while spending an evening with Senator Shannon Grove, State Senate Minority Leader, and her staff,” board president Tom Courtney said. “It was great to receive an invitation to the State Capitol to discuss ‘whatever support we need’ and to be shown around and introduced on the Senate Floor.”
Board Vice-President Jessica Risler agreed wholeheartedly.
“We were so honored to be invited to join such an amazing team of passionate and determined representatives of our district this evening,” Risler said. “The wonderful light-hearted conversation we shared between Senator Grove and her assistants further proves their genuine character and compassion for our community.”
LVUSD Superintendent Peter  Livingston stated, “We would like to thank our Senator for her support to small school districts, local control, and listening to the needs of Lucerne Valley.”
Courtney, who was named board president during the annual reorganization on December 9, noted that Senator Grove was kind enough to take a “selfie” and send it to past State Senator Jean Fuller and express she was with friends of hers.
“Thank you Senator Fuller for the love you shared with schools and thank you Senator Grove for picking up where she left off and caring about small districts like ours,” Courtney said.
PHOTO CAPTION:
LVUSD board president Tom Courtney, Vice President Jessica Risler, and Superintendent Peter Livingston meet with our Senator Shannon Grove.