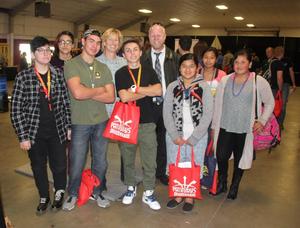 District Superintendent Peter Livingston is invited to share success strategies at Small School District’s Association first collaboration event in early February.
The Lucerne Valley Unified School District has been recognized as one of the top small school districts in the state and its superintendent invited to share success strategies at the Small School District Association’s first collaboration event in Los Angeles on February 2-4.
“This recognition and invitation are highly selective and is a tremendous recognition for a job well done by the governance team and the administrative staff, teachers and all others throughout your organization,” Timothy J. Taylor, the executive director of the Small School Districts’ Association, wrote in a letter to the district. “We look forward to hearing more about the work Lucerne Valley USD is doing.”
The leadership of the district’s superintendent Peter Livingston has made a tremendous difference in setting the tone and direction for success, Mr. Taylor said.
“Mr. Livingston is recognized as a motivating and exceptional educational leader for others to learn from. SSDA has worked with Lucerne Valley and their commitment to strong board governance and leadership. This is the key component of operating a great school district,” Taylor said.
The superintendent sees a team effort by all stakeholders as key to the Lucerne Valley USD’s successes. “It is an honor to be recognized by SSDA as a top California Small School District,” Mr. Livingston said. “The work of all our certificated and classified staff, administration and school board has driven positive change. We look forward to continue bringing expanded opportunities to Lucerne Valley.”
School Board President Tom Courtney, who has served on the board for a quarter of a century, believes Mr. Livingston’s leadership has made a difference in many ways.
“Peter is one of the best superintendents we have ever had here and his organization, as well as his ability to search and find the right folks for positions in our district, is a real factor in our success,” Mr. Courtney said.
According to Mr. Livingston, Lucerne Valley USD highlights include the continued opportunities in the nationally recognized FFA program, the certification in under two years for AVID, implementation of the Bud Biggs STEM lab at the elementary school, increase in test scores in Math and Language Arts, and the use of Local Control Accountability Plan (LCAP) to expand programs including Cadet Corps. Lucerne Valley USD also had a successful one-to-one implementation of Chromebooks with all middle and high school students receiving their own laptop computer. District enrollment is up over 20% in the past three-and-a-half years with 841 students today compared to 669 at the end of the 2015-16 school year.
Both Mr. Livingston and Mr. Courtney credit the guidance of former longtime school board president Jim Harvey, who continues to serve as a board member, as being instrumental in district successes.
“As you know our former Board President Jim Harvey is responsible for the guidance and direction to place us in this position,” Mr. Courtney said. “I am proud to serve with him and extremely proud of our membership in SSDA.”
Mr. Livingston’s travel costs and expenses to the upcoming event will be covered through funds provided by the Bill and Melinda Gates Foundation, according to the SSDA.
Over the next year, the SSDA is planning a series of three meetings that will feature 13 small school district leaders to come together and share best practices. “We expect this to be a national model of leadership development and a new professional development model,” according to Taylor.