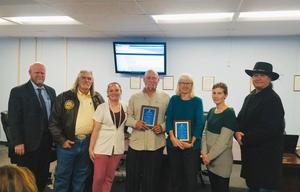 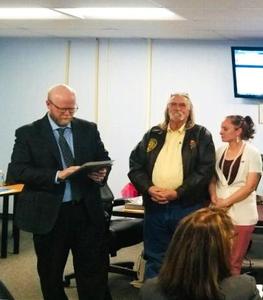 Veteran Lucerne Valley Elementary School teacher Chris Pennington and highly skilled Maintenance and Operations staff member Robert Rietdyk were named Employees of the Month at the Lucerne Valley Unified School District’s monthly board of trustees meeting on Thursday, February 13.
With staff members, friends and family in attendance, Superintendent Peter Livingston presented the awards to the awardees who then were congratulated by board President Tom Courtney, Vice-President Jessica Risler, who conducted the meeting, and board members Chelsea LaGrange and Jim Harvey.
Ms. Pennington, who was recognized as the certificated employee of the month, is a veteran of the LVES staff and has done a fantastic job with the school’s third graders. She has taught multiple grades over the years, consistently having top test scores on state assessments.
“Chris is a dedicated educator and has always been a resource to everyone on staff,” Mr. Livingston said, reading from her nomination letter. “Her classroom is a hub for knowledge and rigor for all students.”
This year, Ms. Pennington opened her class to observers to see the highly-engaged instruction that occurs in her classroom. The engagement comes from the teacher’s effort to make learning fun, how she interprets her data and adjusts her instruction. The results show through multiple assessments, according to the superintendent.
Ms. Pennington also serves as the school’s historian. In fact, some of Ms. Pennington’s classes have written books on the history of Lucerne Valley Elementary School and Lucerne Valley itself.

Robert Rietdyk was recognized as this month’s LVUSD classified employee of the month. He is a highly-respected member of the elite force, Maintenance & Operations Department. Mr. Rietdyk came to the district with multiple years of experience in the construction field, not-to-mention a tremendous skill set. He always puts forth his maximum effort in every endeavor no matter how big a job, or how small.
“His knowledge and strengths have helped the M & O Department to excel beyond expectations,” according to his nomination letter by LVMHS Principal Nate Lambdin. “The technical skills he possesses and the hard work is done in such a way that it does not appear to be a grind or even work. He serves as the spark plug for the department and has the vim and vigor to rally the M & O team’s ability to complete even the most difficult projects. His willingness to share ideas and know-how with others has helped save the district from having to out-source jobs to sub-contractors.”
Because of the respect others have for his dedication and hard work, Mr. Rietdyk has had a positive influence on everyone with whom he has had contact, Mr. Lambdin’s letter added.
-------------
PHOTOS:
#1:
Lucerne Valley USD Employees of the Month Chris Pennington and Robert Rietdyk were honored during Thursday's regular meeting of the LVUSD governing board. From left, Supt. Peter Livingston, Board Vice-President Jessica Risler, Robert Rietdyk, Chris Pennington, and board members Chelsea LaGrange and Jim Harvey. Photo by Douglas Beaton
#2
Supt. Peter Livingston, left, announces the awards for this month's Employees of the Month. Photo by Douglas Beaton