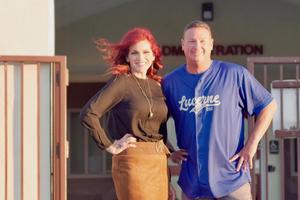 By LVUSD Social Media
Years ago, the Houston Rockets had “twin towers” Ralph Sampson and Akeem Olajuwon to cover the basket. While definitely not as tall as the NBA 7-footers, Lucerne Valley Middle High School now has a big one-two punch at the top with Ms. Kelly Boeing named co-principal to complement Mr. Nate Lambdin.
Formally hired to the position by the district’s school board on May 14, the current assistant principal’s new position was announced to the LVMHS staff on Wednesday. Reaction on social media was emphatic: “Awesome!” “Well deserved.” “You deserve the opportunity, and you have earned the trust at every endeavor you have taken on,” wrote School Board President Tom Courtney. “Proud to have you.”
But the biggest praise came from Mr. Lambdin, who championed the move to elevate Ms. Boeing. He credited Boeing with having a mindset of creating a positive school culture. Testament to that is how Ms. Boeing has become a national expert on how small school districts can utilize Social-Emotional Learning (SEL) to boost classroom behavior and improve grades.
“Research shows that the dual leadership model of co-principalship is one of the most effective models to meet the increasing challenges of school leadership,” Mr. Lambdin said at the board meeting. “But it takes the right two people. Without a doubt I believe that Kelly and I are the right team to meet the needs of our stakeholders. Kelly’s the right person to do this with.”
Moreover, according to Mr. Lambdin, who also serves as a LVUSD assistant superintendent, having two top school administrators creates more accessibility for parents. “If a parent comes in and wants to see the principal, they’ll be able to see the principal then and there,” he said.
Following the school board’s unanimous vote to hire Ms. Boeing as co-principal, the audience erupted in a hearty applause.
Kelly Boeing taught for 12 years in Southern California including a stint at Oak Hills High School. She has taught high school and middle school math, English, and ASB. She received her bachelor's degree from Cal State Fullerton in Liberal Studies. Boeing has earned three Master’s Degrees: a Master’s in Teaching from Chapman University, a Master’s in Special Education from Chapman University, and a Master’s in Educational Leadership from Azusa Pacific. She is currently working on a fourth, a Master’s in Educational Technology from Azusa Pacific.
Ms. Boeing is married to Randy Boeing and lives in Lake Arrowhead with her family.
Both Ms. Boeing and Mr. Lambdin are looking forward to seeing students back on campus next school year after several challenging months dealing with the COVID-19 pandemic and related temporary school closures. The new two principal arrangement will help meet student needs.
“I am so excited for this next step and am so glad to be on this journey with this team,” she said.
According to Mr. Lambdin, their task will be a special one that transcends their titles.
“The role of the principal on this campus is not about the principal. It’s about moving this school site forward and meeting the needs of our stakeholders. Kelly is brilliant and she brings so much to the plate, and we can work effectively together.”
Ms. Boeing will start her new position as co-principal on July 1.
--------------------
Mr. Nate Lambdin, right, will share principal duties with Ms. Kelly Boeing, left, starting on July 1.