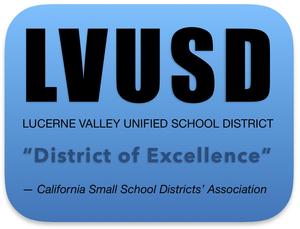 LVUSD Social Media
The Lucerne Valley Unified School District is one of only two out of hundreds of small school districts in the state to be named a “District of Excellence” by the California Small School Districts’ Association (SSDA).
The SSDA cited several factors for recognizing the Lucerne Valley USD with its award, which was announced by SSDA executive director Tim Taylor, a featured speaker at the Lucerne Valley High School graduation ceremony on May 29th. Those reasons included an increase in test scores over the past four years, outstanding board governance that included the creation of a governance handbook and a transparency policy, and trainings with the Small School District’s Association on effective governance.
The SSDA also cited the district’s nationally-recognized FFA program, AVID certification at the Middle/High school along with fully-trained staff in AVID strategies, and implementation of the Local Control Accountability Plan (LCAP) to support its students including the state-of-the-art Bud Biggs STEM lab at Lucerne Valley Elementary School. The SSDA was impressed with the district’s implementation of Social Emotional Learning programs, and collaboration with neighboring school districts featuring walk-throughs with the Victor Elementary School District.
“It is an honor to be part of the LVUSD family,” said Tom Courtney, president of the district’s Board of Trustees. “Our staff and students drove our district to this well-deserved recognition. Other districts and charter schools are regularly working with us to drive all of our schools forward to serve our students in our district as well as across the state.”
Courtney said the school board’s decision to hire Peter Livingston as its superintendent four years ago was key to the school district’s current successes.
“Peter has brought us together as a cohesive board,” Courtney said. “His leadership has restored our faith in our ability to be team players. He has also assembled the greatest team of site administrators this district has ever seen. Our teachers have been inspired, their spirits, salaries and pride have all been restored.”
Courtney cited several leadership decisions by Livingston that have helped the district move forward and better serve its students. Among them, according to Courtney, was naming Nate Lambdin and Kelly Boeing co-principals at Lucerne Valley Middle High School. Previously, Lambdin was also named a school district assistant superintendent. Boeing is a nationally recognized Social Emotional Learning trainer who has been invited to training sessions across the United States.
“Our staff is thrilled with the quality of leadership these folks provide and the invigorating style that continually focus on giving them the way to provide student learning.”
Courtney also believes that Livingston has provided outstanding leadership on the district’s charter schools. “Our Board has worked to provide charter schools to allow for parent choice and optional learning opportunities,” he said.
Board members further discussed the SSDA’s recent award during Thursday’s monthly school board meeting at the Middle High School.
“To be a ‘District of Excellence’ you did something different than just being great,” board vice-president Jessica Risler said to school site administrators during Thursday’s board meeting. “Where other districts are just trying to be at the line, we dance over that line and we throw a graduation over that line,” alluding to the success of the recent “drive-up” high school graduation. “When they tell us to slow down, we go faster. When they tell us to stay a little calmer, we get louder. That’s what makes us excellent. Kudos to everyone involved. You guys are amazing people. More than that, you’re more than human. You’re super heroes.”
For Courtney, who has served on the school board for more than a quarter century, the award from the SSDA is especially meaningful.
“This is just a prize at the end of a long, long road,” Courtney said at the meeting. “For the last 25 years we said we want to become a model district. We are. We made it. We’re a model district now because of the hard work. I’m proud to be on this board, now more than ever.”