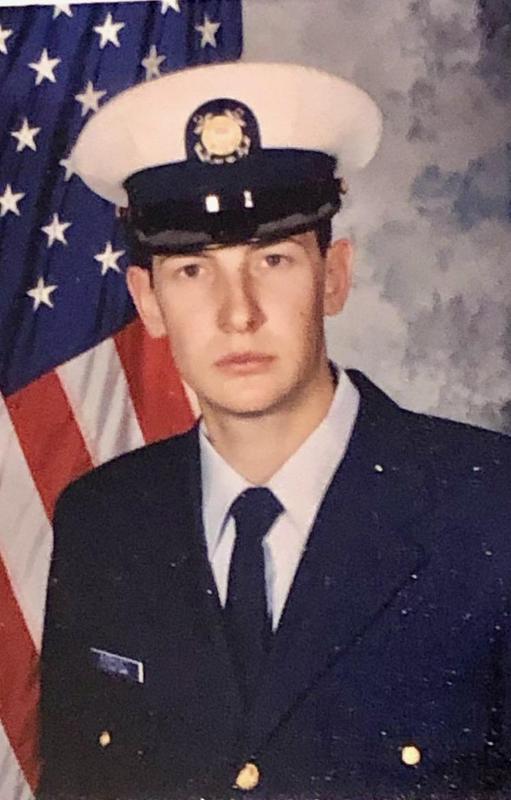 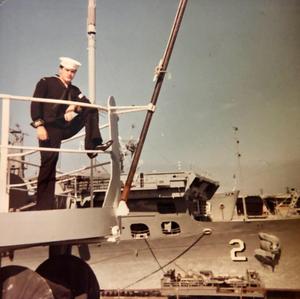 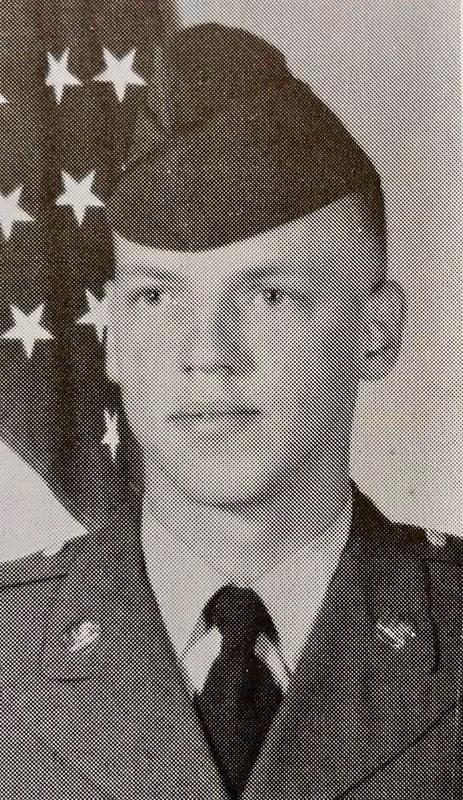 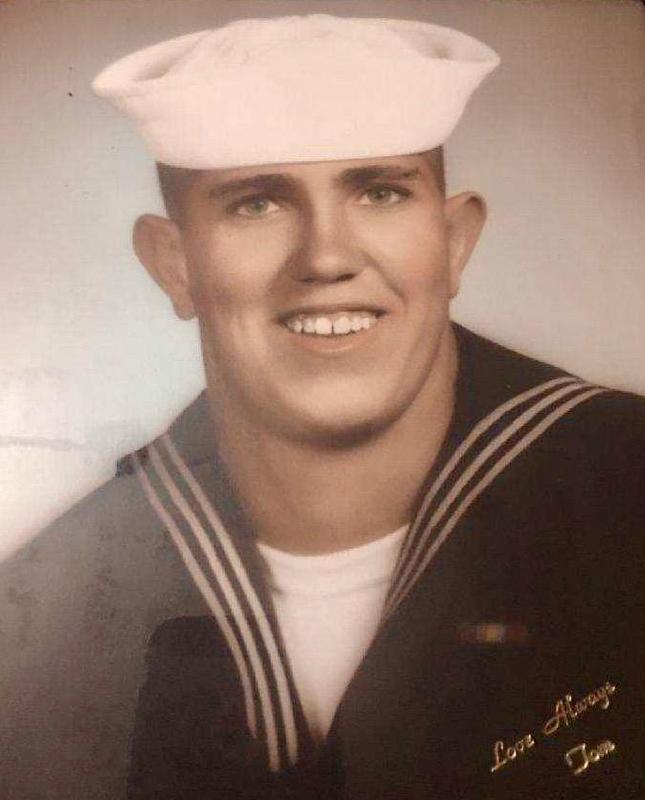 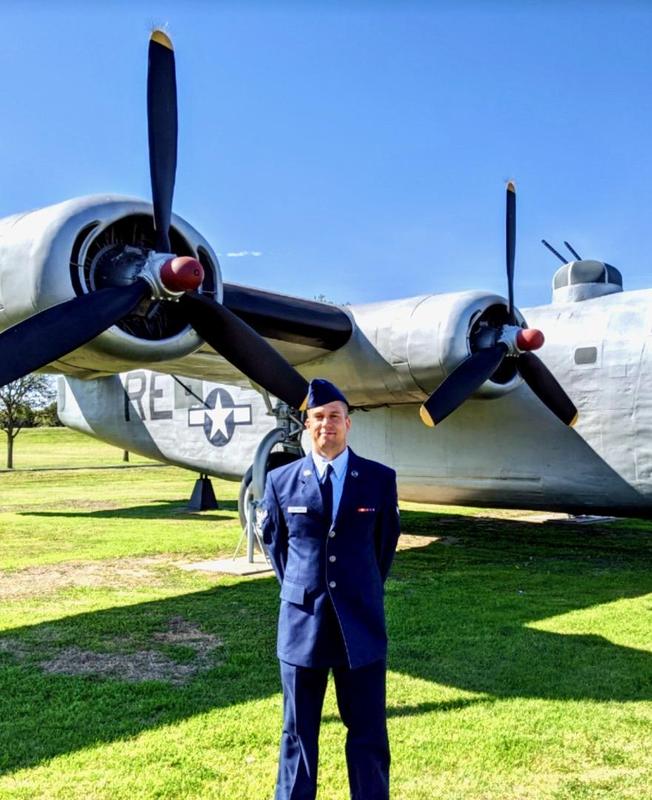 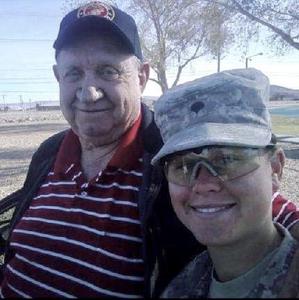 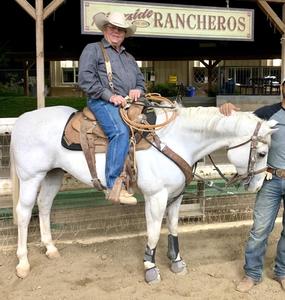 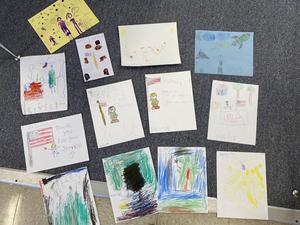 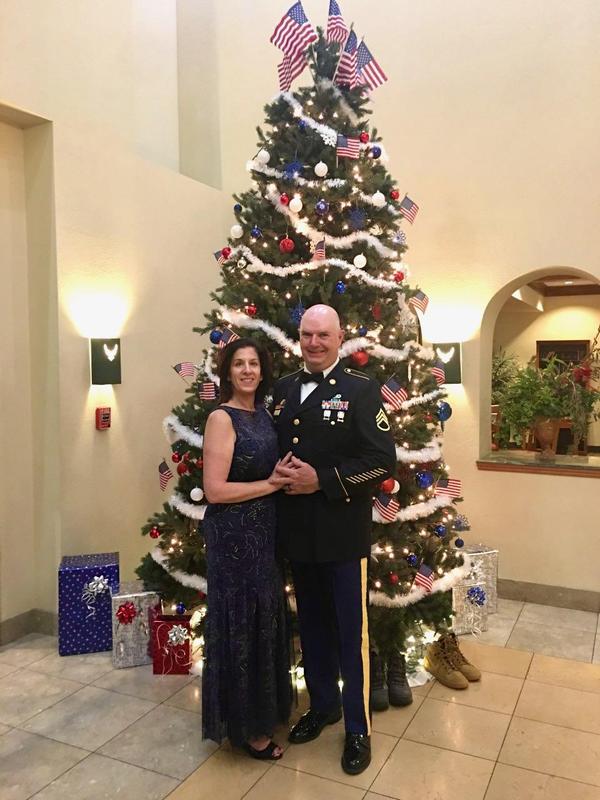 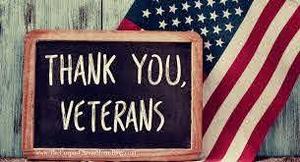 Elementary school kindergartners make cards to show support for veterans at the Veterans Home of California in Barstow.
By Peter Day
For Lucerne Valley Elementary School Principal Ricky Anderson, Veterans Day hits close to home. “Veterans Day is near and dear to my heart since my grandfathers were in the U.S. Air Force and Navy and one was awarded a Purple Heart.”
So, Mr. Anderson asked the district’s Information Technology team member Jacob Rodriguez if he knew any school district employee who served in the military that would be willing to share a photo for the school newsletter. Mr. Rodriguez, who served in the Coast Guard, shared his own photo and asked around, discovering that many school district employees and their loved ones have served our country.
Veterans Day is especially important to kindergarten teacher Christine Fuller and her husband Douglas Fuller, a sergeant in the U.S. Army.
“Between myself and my husband we have had a family member serve in every war since the Revolutionary War except for Vietnam,” she said. “My husband is a twice-deployed Iraq War veteran who was injured in his first deployment.  He spent a total of 18 months in Iraq when our children were in elementary and middle school.”
The Fullers’ military service extends through the generations.
“My husband’s father served in the Navy during WWII.  My father served stateside during the Korean War.  I was also a teacher in Germany for the Department of Defense during the Gulf War. Almost all of my students’ fathers and some mothers there were deployed.”
The Fullers also know that service is not just an abstract concept. It’s much more than that. It comes from the heart, and with it a weight is carried.
“I know how stressful war can be on the families. The support of civilians was so meaningful to me during both wars. The smallest thing that you do for a veteran and/or their family, especially during wartime, means more than you can imagine.”
To share her admiration of those who serve their country, Mrs. Fuller and other Lucerne Valley kindergarten teachers helped their students to create and send personalized cards, with the help of student family members, to veterans who reside at the Veterans Home of California in Barstow.
Joanne McGinnis, the Administrative Assistant of Student Educational Services at the elementary school, has two adult children serving in the military. In one photo submitted by Mrs. McGinnis, her daughter Leanne McGinnis is pictured with her father Duane Saindon, a Marine. The photo was taken at Ft. Irwin in 2015 when Leanne was getting ready to deploy to Iraq. Mrs. McGinnis’s son Brett McGinnis serves in the Air Force.
Several more Lucerne Valley staff members have served. A well-known barber in town by day, elementary school custodian John Cosato was a sailor while serving in the Navy during the Vietnam War. Maintenance worker Mark Hart served in the Army during the 1980s. Teacher Mary Eller’s husband Dennis Eller is a Vietnam-era veteran, and kindergarten teacher Leigh Hannon’s dad, Reinhold Peterson, was in the Air Force.
The father of Matthew Roehl, a teacher at the Middle High School, served on the front lines in the Korean War in 1951. “My dad, who is now 91, survived only because his rifle strap got caught on a low tree while he was fleeing for his life, which delayed him about one minute while he untangled it as the rest of his platoon was attacked.”
Most of his platoon died in the attack.
Tom Courtney, the president of the Lucerne Valley Unified School District’s school board, says, “Veterans Day is a bittersweet thing for me.” In 1969 Mr. Courtney served in the Tonkin Gulf in Vietnam while his two brothers served in the States. An Aviation Ordinance man, Mr. Courtney’s brother Bob drove the tanks at Fort Knox while his youngest brother worked in the Niki Hercules Missile project in Alaska.
“I was on the flight deck of the USS Oriskany CVA 34 and loaded 500-pound bombs and 20-caliber machine guns. Not too many folks on the ship messed with us and that was a good thing. I turned 19 years old on that ship. We were not real sure why we were there, but we did our job. Our squadron, the VA 192 World Famous Golden Dragons, won a Navy Unit Citation for loading and delivering the bombs. We worked hard and played hard. I signed papers so my brothers couldn’t come to Vietnam, and I am glad I did.”
“To see other veterans and have them say, ‘Thank you for your service,’ is a very moving thing. When we came home we were met by the protestors on the Golden Gate and Bay Bridge with ‘baby killer’ signs. No parade and no real fanfare. My mom and dad met me in Oakland and took me back home to Big Bear Lake. But the very worse thing is thinking of my best friend Donald James Deevers giving his life for those people on the bridge.”

Despite the difficult memories, Mr. Courtney is glad he served his country.
“I feel pride when I hear Lee Greenwood, Toby Keith and others sing their patriotic songs. Our (high school) graduation this last year with the young lady Breanna Mills on her rescued Mustang ‘Digger’ carrying the American Flag brought tears to my eyes thinking about those who did not come home. Never again can we not thank those who at 18, 19, 20 years of age were drafted or joined. Their dedication and service reminds me of the Billy Ray Cyrus song “Sandy Kane”:
“All gave some – some gave. Some stood true for the red, white and blue and some had to fall. But if you ever think of me, think of all your Liberty and recall, some gave all.”
Peter Day is a social media advisor for the Lucerne Valley Unified School District.
A photo album of the district’s staff members who have served in the military is on the Lucerne Valley USD Facebook page.