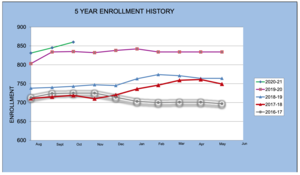 By LVUSD Social Media
The Lucerne Valley Unified School District is experiencing its highest enrollment numbers in years with the elementary school leading the way. October’s district-wide enrollment was 860 students with Lucerne Valley Elementary School at 494.
Over the last five years the elementary school’s enrollment grew each year from an average of 387 in 2016-17 to 420 the next year followed by enrollment of 453, 475 and 494 students in October 2020. But on November 12th, the day of the monthly school board meeting, Lucerne Valley Elementary School’s enrollment climbed to 500.
“Going from 387 to close to 500 in five years is close to 30% growth,” Superintendent Peter Livingston said. “Tremendous job. Kudos to the elementary school. That’s exciting news!”
Unlike previous years when district-wide student growth fluctuated, 2020-21 has seen a steady climb.
“We did not level out like we did in the past years,” Livingston said, adding that the district enrollment numbers had risen to 867 on the day of the meeting. “Instead, we continued an upward trajectory.”
After finishing the 2019-20 school year with 834 students, enrollment virtually picked up at the same spot beginning the 2020-21 school year at 831. Soon after the school year began the elementary school became one of the first in the state to reopen to a hybrid schedule of in-class and distance learning.
Peter Livingston was hired as school district superintendent in mid-2015.