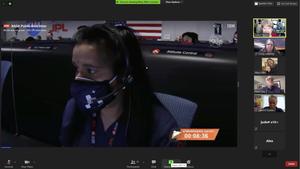 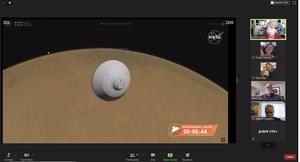 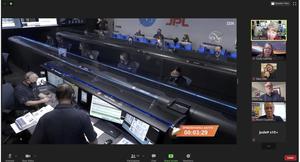 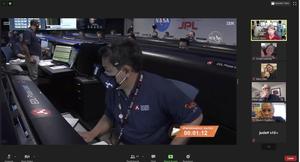 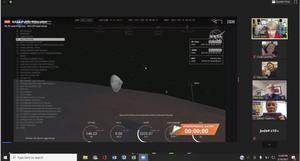 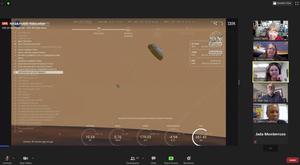 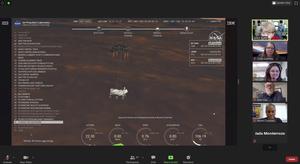 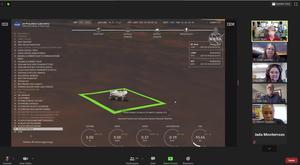 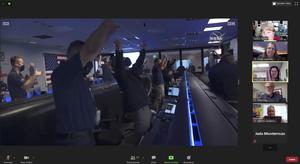 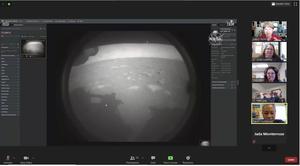 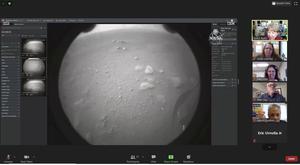 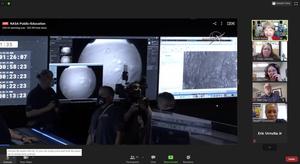 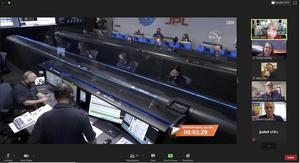 By Peter Day
LVUSD Social Media
LUCERNE VALLEY — Mrs. Eller’s 4th-grade Lucerne Valley Elementary School class held a party on Thursday that was short and sweet — and truly historic.
The reason for the event was the landing of Mars Rover Perseverance, which touched down gingerly on the Red Planet’s Jezero Crater after traveling from Earth for the last seven months. Organized by Mrs. Eller, who grew up just a few miles from Jet Propulsion Laboratory, the featured guest of the “watch party” was Julie Taylor, a NASA Solar System Ambassador and educational liaison who last year piqued the space exploration appetites of students in several Lucerne Valley Unified School District classes. Besides Mrs. Eller’s students and others from LVES, the party included Middle School teacher Naomi “Ms. O” Oyadomari, Mrs. Cindy Lazenby and Peter Day, the district’s social media advisor whose reports often appear in the Daily Press and Leader newspapers.
Scheduled for a 1 p.m. landing, the watch party began a half hour earlier with students filtering in on Zoom, followed by Mrs. Eller who greeted watch party attendees.
Educator Mrs. Taylor brings a wealth of experience. She was a teacher at the Adelanto School District for 37 years, retiring in 2007. Prior to retiring, she was selected a Presidential Awardee for Elementary Science, received the NSTA Distinguished Teaching Award for Middle School in 2007 and was awarded the Crystal Apple Award from KNBC in 2000.
But space exploration is where Mrs. Taylor’s passion is.
She was named the Young Astronaut Teacher of the Year/American in Space Award in 1994, she wrote the grant for Columbia Middle School a NASA Explorer School, and was named a Solar System Ambassador by NASA. So the Lucerne Valley Elementary students had the perfect person to provide expert commentary during the rover landing.
Prior to the NASA event, she provided numerous information tidbits about the history of the Perseverance and what it — and additional equipment aboard — will be doing while on Mars. (The rover’s main mission is to find signs of ancient life and collect rock samples for a possible return to Earth.)
One of the more fascinating is the Mars Oxygen In-Situ Resource Utilization Experiment, known as MOXIE. With NASA preparing for human exploration on the Red Planet, MOXIE will demonstrate a way for future explorers to produce oxygen from the Martian atmosphere. This will be used as a propellant to return to Earth and for breathing. “They can’t send enough oxygen with them to get them home,” she explained.
The rover also will explore for water, which could someday help future astronauts visit Mars. “We don’t want to have to ship it from Earth.” Importantly, Perseverance will look at the chemical composition of the planet’s rocks. “They don’t want to go to a part of Mars that’s unhealthy for humans.”
Onboard Perseverance is Ingenuity, a 4-pound helicopter whose purpose is to prove that like the Wright brothers proving that flight on our planet was possible, flight is possible in a Martian atmosphere. Also, “Percy” will use its 7-foot arm to drill and collect samples to see if there ever was microscopic life on the Red Planet. A few small samples will be put into tubes and put aside for a future rover to retrieve and bring back to Earth.
“There’s just a lot happening,” Mrs. Taylor said. “There’s just all kinds of exciting stuff.”
The Lucerne Valley students watched the NASA live feed intently. After Perseverance entered the Martian atmosphere on Thursday, it zipped on down quickly. With 4-1/2 minutes to go, a NASA scientist serving as the countdown narrator said they were receiving “heartbeat tones.”
Meanwhile in Lucerne Valley, Ms. O showed the excitement from her computer, holding up a pink Post-It note reading “2 min!!!”
“Julie, are you nervous?” she asked. “Yes,” Mrs. Taylor answered.
Finally a 70-foot parachute was released and then a rocket-steered “sky crane” lowered the rover the final 60 feet. “Yeah for the parachute!” Ms. O exclaimed. “Kids, you just watched space history, live!” Applause broke out at JPL’s Mission Control and throughout the Lucerne Valley’s Zoom watch party.
“We just heard the news that Perseverance is alive on the surface of Mars,” the NASA announcer said.
Following the rover landing, Mrs. Taylor answered questions from curious students. She said the rover won’t move for a few days and then it will run some tests. Taylor also noted that the Lucerne Valley USD has studying space exploration for many years.
More than 10 years ago, several LVES classes including those of Mrs. Eller, Mrs. Hall, Ms. Pennington and Mrs. Miller constructed the 7-foot-tall Hubble Cube, which contained artwork to honor a NASA astronaut who repaired the well-known Hubble telescope. The cube was displayed at the San Bernardino County Museum and later placed for viewing at Johns Hopkins in Baltimore, MD.
The Perseverance rover cost $2.7 billion. It has a plutonium-based power supply which could keep it viable for 10 years or more. Another rover to be built by the Europe Space Agency is expected to land on Mars in about 5 years.
Screenshots by teacher Mrs. Cindy Lazenby