In The News: Multiple Districts Put Students First in Journey Back to Class 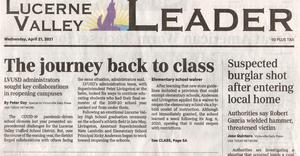 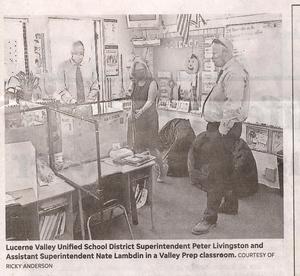 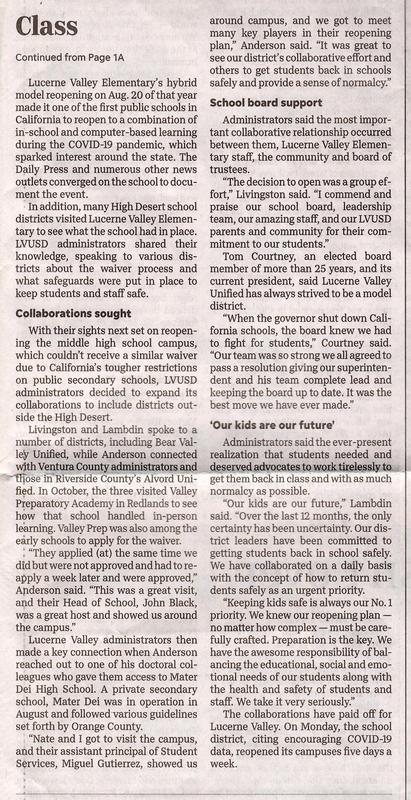 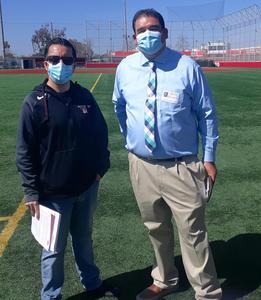 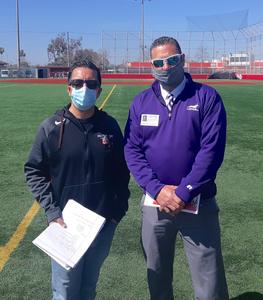 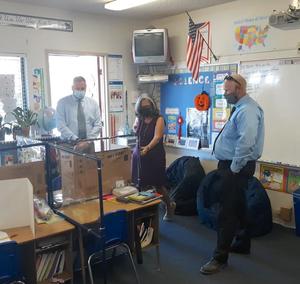 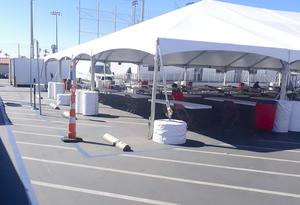 Lucerne Valley USD administrators sought key collaborations to bring students back to campus safely, effectively.
This article originally appeared in the April 21, 2021 issue of the Lucerne Valley Leader weekly newspaper.
By Peter Day
Like all other school districts in California, the COVID-19 pandemic-driven school closures of the spring of 2020 presented unprecedented challenges for the small, rural Lucerne Valley Unified School District. But over the course of the ensuing year, the district forged collaborations with others facing the same situation.
Lucerne Valley USD’s administration team, with Superintendent Peter Livingston at the helm, immediately looked for ways to continue educating students who were facing their final semester of the 2019-20 school year yanked out from under them. Following an emotional Lucerne Valley High School graduation ceremony on the school’s athletic field in late May, Livingston, Assistant Superintendent Nate Lambdin and Elementary School Principal Ricky Anderson began to work toward reopening the schools — hopefully sooner than later.

Learning that new state guidelines included a provision that could exempt elementary schools, Anderson and Livingston applied for a waiver to allow for reopening the elementary school on a limited, hybrid model. Although not immediately granted, the school learned a week following its August 6th opening that it would be allowed to reopen with restrictions.
Lucerne Valley Elementary’s hybrid model reopening on August 20th made it one of the first public schools in California to reopen to a combination of in-school and computer-based learning during the COVID-19 pandemic, which sparked interest around the state. Besides the Daily Press, numerous other news media outlets converged on the school to document the event.
Not only was the news media interested, but many High Desert school districts would visit Lucerne Valley Elementary to see what the school had in place. LVUSD administrators gladly shared their knowledge, speaking to various districts about the waiver process and what safeguards were put in place to keep students and staff safe.

With their sights set on reopening the Middle High School campus, which wasn’t able to receive a similar waiver due to the state’s tougher restrictions on public secondary schools, LVUSD administrators decided to expand its collaborations to include districts outside of the High Desert.
Livingston and Lambdin spoke to a number of districts including the Bear Valley Unified School District, while Anderson connected with Ventura County administrators and those in Riverside County’s Alvord Unified School District. In October, the three visited Valley Preparatory Academy in Redlands to see how they handled in-person learning. Valley Prep also was among the early schools applying for the waiver.
“They applied the same time we did but were not approved and had to reapply a week later and were approved,” Anderson said. “This was a great visit, and their Head of School, John Black, was a great host and showed us around the campus.
Then they made a key connection when Anderson reached out to one of his doctoral colleagues who gave them access to Mater Dei High School. A private secondary school, Mater Dei was in operation in August and followed various guidelines set forth by Orange County.
“Nate and I got to visit the campus, and their Assistant Principal of Student Services Miguel Gutierrez showed us around campus, and we got to meet many key players in their reopening plan,” Anderson said. “It was great to see our district’s collaborative effort and others to get students back in schools safely and provide a sense of normalcy.”

The most important collaborative relationship, however, was between the administrators, the school staff, community and board.
“The decision to open was a group effort,” said Superintendent Peter Livingston. “I commend and praise our school board, leadership team, our amazing staff, and our LVUSD parents and community for their commitment to our students.”
“We have always strived to be a model district,” said Tom Courtney, an elected board member of more than 25 years and the current president. “When the governor shut down California schools the board knew we had to fight for students. Our team was so strong we all agreed to pass a resolution giving our superintendent and his team complete lead and keeping the board up to date. It was the best move we have ever made.”

‘OUR KIDS ARE OUR FUTURE’

Propelling the team on its journey was the ever present realization that the students needed and deserved advocates to work tirelessly to get them back in class and with as much normalcy as possible.
“Our kids are our future,” Lambdin said. “Over the last 12 months, the only certainty has been uncertainty. Our district leaders have been committed to getting students back in school safely. We have collaborated on a daily basis with the concept of how to return students safely as an urgent priority.
“Keeping kids safe is always our number one priority. We knew our re-opening plan — no matter how complex — must be carefully crafted. Preparation is the key. We have the awesome responsibility of balancing the educational, social, and emotional needs of our students along with the health and safety of students and staff. We take it very seriously.”
The collaborations have paid off for Lucerne Valley. On Monday, April 19th, the school district citing encouraging COVID-19 data, is scheduled to open five days a week.
————
PHOTOS:
Superintendent Livingston and Assistant Superintendent Lambdin in a Valley Prep Classroom. Photo by Ricky Anderson
Nate Lambdin is shown with Miguel Gutierrez of Mater Dei High School.
Ricky Anderson is shown with Miguel Gutierrez of Mater Dei High School.
Mater Dei utilized large tents as part of its educational facilities since reopening during the COVID-19 pandemic. Photo by Ricky Anderson