School Board Awards Administrators, Employees of the Month 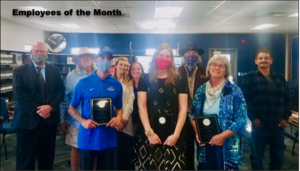 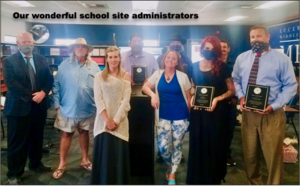 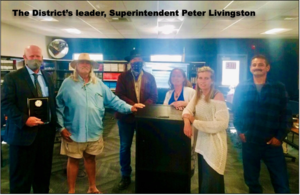 Superintendent, site administrators and employees Almodovar, Burns and Muller cited for outstanding service.
LVUSD Social Media
As the historic — and challenging — school year of 2020-21 is nearing its end, the school district is thanking all of its employees for all they have done for the district and our students. Specific employees were commended for their dedication and hard work at Thursday’s monthly school board.
First, the district recognized three employees as its Employees of the Month. They are Middle High School teacher/coach Nolan “Coach A” Almodovar and two versatile Elementary School front office staff members, Carisha Burns and Fran Muller. All three were given plaques after being personally commended by Superintendent Peter Livingston and board members Tom Courtney, Jessica Risler, Chelsea LaGrange, Ruben Medina and Jim Harvey.

Next, the three school site administrators were awarded for providing leadership to staff, students and fellow administrators over the past school year.
Board President Courtney, who has grandchildren at the elementary school, called LVES Principal Ricky Anderson “a great leader.” Board Vice-President Jessica Risler said Anderson, who took over from Burt Umstead last July, “took big shoes and filled them better than anybody could.” She added, “You’re a good person.”
About Boeing, who was appointed co-principal last June, Courtney said, “You’re one-of-a-kind, Kelly.”
“Kids look forward to getting in trouble to be in your office,” Risler joked.
Courtney thanked LVMHS co-principal/assistant superintendent Nate Lambdin. “Nate, you are a pleasure to work with. The leadership is invaluable.” Livingston said he wouldn’t know what to do without Lambdin’s vision, especially over the last year.
Several board members, administrators and teachers applauded Superintendent Peter Livingston for always keeping his eye on the ball and going to bat for the students.
“Without you we would have been in a lot of trouble,” said Courtney, who has served on the school board for more than a quarter of a century. “You never fail to keep us on the same page. You made us proud up and down the state. You fight for children. You fight for what’s right.”
Risler noted that Livingston is tough when he has to be but able to compromise when needed. “You’re not afraid to bend, but you don’t break,” she said. “We appreciate you more than words can say.”

EMPLOYEES OF THE MONTH

During Superintendent Livingston’s presentation of the Employees of the Month awards, he said Mr. Almodovar not only is an 8th-grade math and science teacher, but he serves as the high school’s head football and baseball coach.
“As a teacher, Coach A is always positive, caring and genuinely interested in helping students succeed. He is always willing to help students with their problems. Students know that they can seek his advice any time, and frequently turn to him with problems. Nolan is extremely sensitive to the behavior of students, and seems to know exactly when praise and encouragement are needed by a particular student. This sensitivity has earned the trust and admiration of many students. Mr. A provides encouragement to students who do not understand the class work and gives them the individual help they need. This genuine concern for students and the time that he devotes to them have made him a valuable member of our staff.”
Of classified awardees Ms. Burns and Muller, Mr. Livingston said “both have played an instrumental part in the Elementary reopening and have worked exceptionally well this year on our office staff.”
Ms. Burns has served many roles while at LVUSD. She has worked as an instructional aide, a school clerk, and in student records. She is a dedicated worker and always willing to work with families as they come through the office. Currently, she is also working as the supervisor of the After School Program at the elementary site.
“She is a welcoming presence in the front office and always willing to lend a helping hand to everyone coming in. Her warm and caring personality is such an asset to our office staff. She is always ready to step in when other team members are out.”
Fran Muller has worked in many roles at LVUSD, the superintendent said. She has served as a High School clerk, a secretary at First Five preschool and Adult Education.
“She works well with the Lucerne Valley community and always friendly to parents coming in and out of the office. Parents appreciate the time she spends with them, and she has a great rapport which is extremely helpful. Besides being a friendly presence in the front office, Fran has a great sense of humor. She lightens the mood as things get busy throughout the day.”
PHOTOS:
Employees of the Month: Front row, from left, teacher/coach Nolan Almodovar, LVES After School Coordinator Carisha Burns, Office Staff Member Fran Muller; back row, Superintendent Peter Livingston, school board president Tom Courtney, school board secretary Chelsea LaGrange, school board vice president Jessica Risler, and school board members Jim Harvey and Ruben Medina. Photo by Doug Beaton
Superintendent Peter Livingston, et. al: From left, Superintendent Peter Livingston, school board president Tom Courtney, school board member Jim Harvey, school board vice-president Jessica Risler, board secretary Chelsea LaGrange, and school board member Ruben Medina. Photo by Doug Beaton
School Site Administrators: From left, Superintendent Peter Livingston, board president Tom Courtney, board secretary Chelsea LaGrange, LVES Principal Ricky Anderson, board vice-president Jessica Risler, board member Jim Harvey, LVMHS co-principal Kelly Boeing, board member Ruben Medina, and LVMHS co-principal and Assist. Superintendent Nate Lambdin. Photo by Doug Beaton