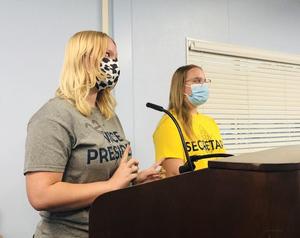 By Peter Day
LVUSD Social Media
School student representatives from the Elementary School, Middle School, High School and several school organizations — some for the the first time in well over a year — shared updates during the monthly meeting of the Lucerne Valley Unified School District’s Board of Trustees on October 14.

Kicking things off was Lucerne Valley Elementary School Student Representative Jennifer Fernandez. She talked about school happenings, past and future. The Welcome Back Dance for sixth-graders on Sept. 15 was 2000s themed and had lots of great songs from that era, Jennifer said. There were many snacks including sodas and water. “There was also a photo booth where me and most of my friends took pictures together and many other people did too.” There were plenty of activities like dancing, taking pictures and even a hula hoop competition, she added. Jennifer also talked about the school’s electives, which are offered every Wednesday. She chose robotics, which is taught by Mrs. Nelson, “so every Wednesday I go to her class at the end of the day and work with Legos and robots.”
LVES 6th graders are able to play middle school sports like volleyball, flag football and cross country. (More sports are offered during the winter and spring). “I can tell the sixth graders are very excited.” The most recent “Spirit Day” was “Disney Day” on Oct. 1st. “Crazy Hair Day” will be held on Friday, Oct. 29th.
Earlier this month, the 5th-graders went to Science Camp in Big Bear. “I’ve heard from many that it’s a fun experience.” An Award Assembly was held last week with “our amazing principal Mr. Anderson, his awesome assistant Mrs. Mora, and the teachers” giving away awards. The Fall Festival (which turned out to be a huge success) was coming up on Oct. 15th. It featured food, music, booths and lots of fun.
The Great California Shakeout earthquake preparedness drill was scheduled for Oct. 21st, she said.

Next up was the LVMS ASB student presentation by Student Representative Holly Watkins, the ASB Secretary.

There is lots going on at the Middle School, said Holly. “Throughout the week of Oct. 4th to Oct. 8th the Middle School participated in Spirit Week. We had a different theme for every day.” The schedule: Monday was Pajama Day, Tuesday was Twin Day, Wednesday was Wacky Wednesday, Thursday was Tye Dye Day and Friday concluded the fun week with Sports Day.
Another special day, this one titled “Field Day,” was held on Oct. 8th and planned by the Middle School ASB, Holly said. “A week before we passed out a survey asking what the students of the Middle School would like to participate in,” she said. “At the start of Field Day we introduced the Middle School sports teams. The activities we had included flag football, soccer, ‘Red Light, Green Light,’ and many other activities.” “Senior Sunrise” was held at 5 in the morning. “Mrs. Evans made breakfast for the entire senior class,” Ian said from Thomas’s slide show. Homecoming was held the previous Friday. Homecoming Queen was Lizbeth Avelar. Levar Timmons was named Homecoming King.
The previous week, the school held a Penny Wars competition with the junior class winning the most pennies with a total of $44.30 (4,430 pennies). The freshman class won the most money award with total of $124.07. The ASB is planning a “Scary Movie Night” and will conduct a blood drive on Oct. 28. The school will honor breast cancer awareness on Oct. 22 with students invited to wear pink.

Ian Collins, the president of the LVHS AVID program, presented the high school’s AVID report.
Here is what he shared: AVID members began the first phase of their college research project, and began conducting AVID binder checks. They completed their first fundraiser, an ice cream sale that raised $120, ran the snack bar twice at the volleyball games and raise more than $200, and had their first guest speaker, LVMHS Counselor Mr. Barda, who went over the A-G requirements and gave college application tips.
The students have begun the tutorial process, peer tutor training and practicing WICOR strategies during class activities. In writing, they learned note taking and inquiry by having whole class escape rooms. For collaboration, they made group posters of the tutorial process, and for organization they kept their AVID binders organized and updated, using their school agendas to keep track of due dates and class info. Lastly, for reflection they did Steps for Success (reflecting on current grades in all classes) and collaborating with the Middle School AVID for FUN Friday activities (Minute to Win It Games).

The past month has been a busy one for Middle School AVID, according to officer Alexis Hale. The program host its first fundraiser of the school year — a photo booth at the Middle School Dance. “It was a blast,” Alexis said. AVID students have been learning about the Tutorial Request Form and the tutorial process. They also interviewed teachers around the school to learn about their college experience. Additionally, “we have completed binder and grade checks every Friday,” Alexis said. “These have helped us to improve our organization and grades tremendously.”
In the next few weeks, the Middle School AVID students will be participating in tutorials every Tuesday and Thursday, beginning planning their Thanksgiving food drive community service activities, and start their College Research Project. On Sept. 9th, Lucerne Valley held its annual Section Meeting. The meeting is led by the team of sectional officers for the seven chapters to learn about team building and leadership skills. On Sept. 29th the FFA chapter had three teams attend the opening and closing ceremonies competition. “Our Novice teams of sophomores and freshmen placed third and fourth overall, and we ended up with a ton of individual awards as well,” the student reps said. “Everyone who attended displayed amazing leadership and public speaking skills, and overall it was an amazing opportunity for everyone involved.”
On Oct. 7th, the freshman FFA members attended their first conference “and one of the first in-person FFA conferences we have had in two years.” At the conference the members learned all about what it takes to be an FFA member “and formed bonds with the freshmen from other chapters.”
Following the Fall Festival on Oct. 15, the FFA Chapter attended the SoCal Conference on Oct. 16th. Greenhand Decree Ceremonies the Chapter Officer Meeting will be held on Oct. 28th. Then, on November 12th, members will attend the High Desert State Leadership Conference.