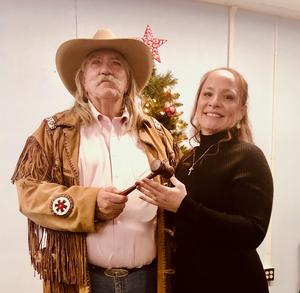 Harvey, who served as president of the board for several consecutive years as Courtney held the number two position, commended Courtney for his service.
“He held us together at really difficult times,” Harvey said. “I’ve never met anybody who keeps kids and the well being of the educational experience of our students more in the forefront than Tom.”
At Harvey’s suggestion, the LVUSD school board has rotated board presidential duties for the past several years. This has given each board member an opportunity to run meetings and assist in developing monthly agenda items.“We’ve been pretty strong advocates for cross-training,” he said.
With that in mind, Harvey suggested the new slate of officers.
Risler was quick to commend her fellow board members in her acceptance.
“I’m very honored to be nominated for that position,” Risler said. “I would agree that any person on this board could hold the position and do a very good job at it. I accept the nomination.”
Following the board reorganization, Mrs. Risler conducted the remainder of the meeting.
PHOTO CAPTION:
Tom Courtney passes the gavel to Jessica Risler after the Lucerne Valley Unified School District’s Board of Trustees named Mrs. Risler president of the board during its annual board reorganization on Thursday, December 16th. Mr. Courtney is the longest serving board member in the school district’s history. Photo by Peter Day