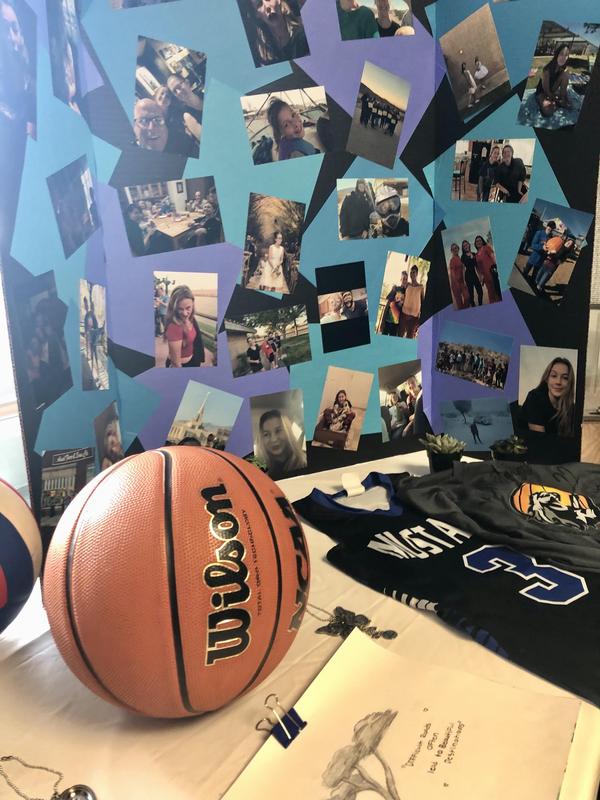 Family remembers silly, fun girl who “would light up the room,” loved basketball and dancing with friends to Tik-Tok videos.
By Peter Day
Kristy Klaus, one of two 16-year-old Lucerne Valley High School sophomores to die following a tragic T-bone traffic collision on April 8th, was remembered for her charisma and good-natured humor, and her love of basketball, dancing, friends and family.
Loved ones, along with teachers, coaches, school administrators and teammates, packed the Church of Jesus Christ of Latter Day Saints on Post Office Road in Lucerne Valley late Friday afternoon.  Also in attendance were family members of Kayden Davis, who also perished as the two school friends sat in the back seat of a vehicle driven by Kristy’s grandmother, Christy Rees. Rees is recovering from her injuries at an area hospital.
“Kristy is my little sister,” said Emma Gardner, “I’m only four years older than her, so we grew up next to each other our whole lives. We shared clothes, rooms, toys — everything.”
Despite not being as close for a period of time when Emma became a teenager, the two were always best friends. They would send each other memes and songs to listen to. “I’d pick her up at school and we’d go to Starbucks or smoothie dates.”
Kristy had a way about her that made people smile, she said.
“She just had a way about her that she could change your mood without even trying,” her sister said. “When she walked into the room the entire atmosphere was removed. If she was laughing, you were laughing. She was kind and she was goofy — and a complete diva.”
“She could light up a room when she walked in,” said her former bible study teacher.
“She was a friend, a leader, a smiler,” said Seth, one of several cousins to share their thoughts about Kristy. “Take on her morals and be just like Kristy. Spread love.”
A close friend who lives in Utah said after she learned Kristy had died she hid in her room and “pretended to do my homework and cried for the longest time,” she said. “The Kristy-shaped hole will be in my heart forever and ever.”
“She was a crazy child,” said her father Kenneth Klaus. “She’d say, ‘Dad, Dad, Dad!’ What do you want? ‘Never mind.’ She had a lot of great friends. She was a beautiful girl.”
Her mother Jody Klaus, who began by saying her heart “goes out to the Davis family also,” questioned why this happened to her daughter, the second child she has lost. “I don’t know why God would take two teenage girls who are vibrant and healthy, but there must be a reason.”
Bishop Dallin Heywood, who presided over the service, said Kristy was a believer who followed LDS core beliefs. “Kristy’s body is here right now, but her spirit lives on.”
Another elder in the church shared thoughts on when a person seems to be taken before their time. “Blessed are they who die in the Lord,” he said, quoting scripture. “Death is only another step in the eternal process.”
Her father added, “She is in the greatest place we know.”
Several cousins, her brother Brent Gardner and others also shared their thoughts, all agreeing that Kristy was a special person that made everyone feel better. The service began with an opening prayer by Michael McGregor followed by the song “If I Die Young” sang by Talia McGregor and Emma Gardner and accompanied by Brianna Woods. The three also performed “Someone You Loved.”
According to the California Highway Patrol, on the evening of Friday, April 8th Kayden and Kristy were passengers in a Honda CR-V driven by Kristy’s grandmother, Christy Rees, a school district food service staff member. As their vehicle was heading east on State Route 247, a Ford Expedition driven by a man later identified as Jesus Gallardo Martin, was traveling southbound on Camp Rock Road. The driver of the Expedition failed to stop at the stop sign and collided with the left side of the Honda, causing it to overturn into an open desert area, according to the report. Both girls were pronounced dead at the scene.
Rees sustained major injuries and is recovering at an area hospital. The driver of the other vehicle was flown via Mercy air to Loma Linda University Medical Center and was placed under arrest for gross vehicular manslaughter while intoxicated and two other charges. He remained in custody while he is being treated for his injuries.
A remembrance honoring Kayden Davis’s life will be held on Saturday, April 23rd at 11 a.m. at Crossroads Chapel in Lucerne Valley. A Celebration of Life will follow at Cougar Buttes.