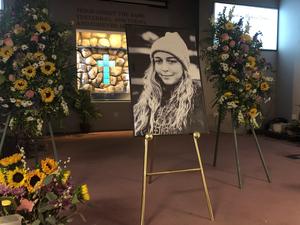 Crossroads Chapel Church in Lucerne Valley was filled to capacity on Saturday, April 23rd as family, students, teachers and countless friends came to celebrate the life of Kayden Madison Davis.
Crossroads Chapel Church in Lucerne Valley was filled to capacity on Saturday, April 23rd as family, students, teachers and countless friends came to celebrate the life of Kayden Madison Davis, the 16-year-old sophomore who died along with her school friend Kristy Klaus as the result of a tragic traffic collision on the evening of Friday, April 8th.
“One thing that’s unique about this town is how we pull together in times like these,” said Pastor Gary Schlenz in greeting the many who came.
Younger sister Zoey Davis read “A Letter From Heaven,” which ends with “Please know I love you always. Look at the stars or look over the clouds. That is where I’ll be. So for now, hold onto our memories and let them bring you nothing but smiles.”
Then Zoey shared her thoughts and memories of her sister Kayden, a fun-loving athletic girl who loved soccer, volleyball and motocross.
“I’m always going to miss her,” Zoey said. “I’ll miss her crying over TikTok videos followed by twerking sessions to make sure she was doing it right.”
Kayden was all about her friends. “Her friends weren’t friends. They were family. She loved them so much.”
Middle High School math/science teacher Chris Klinger said Kayden made a huge immediate impression when she was in his 8th grade class. “My grandma and your auntie are really good friends,” she told him. This year he had Kayden in his 10th grade biology class.  “It was obvious from the start that Kayden had a lot of spirit.” She showed leadership and confidence “and the other side was soft and sweet and compassionate. She just drew people in.”
Mr. Klinger also remembered her as an exceptional three-sport athlete and a captain of several teams. “If there was a motocross team she’d be captain of that too.”
Mr. Klinger, who previously served as the high school’s football coach, said another coach said Kayden “was the heart of the team.”  “She affected everyone around her.”
Despite her competitive nature, “she had that natural ability to put other people above herself.” She often brought a bag full of candy to share with others in class. One student said Kayden was the only person that talked to him on his first day of class.  “The world could use a lot more Kaydens,” Mr. Klinger said.
Lucerne Valley Elementary School teacher Kay Hall shared several memories of Kayden, who was a student in her third grade class. “Kayden Madison Davis. It’s a glorious name for a glorious young lady.”
She remembers when Kayden portrayed a munchkin in the LVES Drama Club production of “Munchkin Mediation: Conflict Resolution in Oz.” Despite not being so sure about her first try as an actor she rose to the top and was chosen as Simba in the club’s “Lion King” production several years later. “She was terrific in it,” said Mrs. Hall, who served as club advisor along with teacher Liuchoy Hirschhorn.
By the end of third grade Kayden hadn’t yet mastered her 12’s in multiplication, so she didn’t receive a rubber chicken prize. The next day her grandmother Britta took her back to Mrs. Hall’s class. She nailed her 12’s and earned her rubber chicken.
“She was sunflower and soccer and teasing and so much love.”
Friend Nicole remembers the “wild child” with much love. With Kayden “you never know what you’re going to expect.”
“We butted heads a lot. It depended on the day.”  Nicole added, “She was one of the most kind people and also one of the most stubborn people.”
Kayden’s Uncle Boomer, who lives in Oregon, thanked everyone for coming and said he told her that when two people look at the moon it’s like you’re close despite being 700 miles away. He also cherished his memory of watching Kayden play softball.
In parting, Pastor Schlenz said that sometimes it’s OK to be angry — as long as you don’t sin. He hoped, however, that Kayden’s loved ones think of funny memories of her, positive ones. That way you can experience “gratitude more than grief.”
Following the sharing, a video slide show was shown with Kayden, her family and friends. A “last ride” was held following the church service at Cougar Buttes with guests invited to “bring your bikes, quads, and side by sides.”
According to the California Highway Patrol, on the evening of Friday, April 8th Kayden and Kristy were passengers in a Honda CR-V driven by Kristy’s grandmother, Christy Rees, a school district food service staff member. As their vehicle was heading east on State Route 247, a Ford Expedition driven by a man later identified as Jesus Gallardo Martin, was traveling southbound on Camp Rock Road. The driver of the Expedition failed to stop at the stop sign and collided with the left side of the Honda, causing it to overturn into an open desert area, according to the report. Both girls were pronounced dead at the scene.
Rees sustained major injuries and is recovering at an area hospital. The driver of the other vehicle was flown via Mercy air to Loma Linda University Medical Center and was placed under arrest for gross vehicular manslaughter while intoxicated and two other charges. He remained in custody while he is being treated for his injuries.
Kristy’s memorial service was on Friday, April 22nd at Church of Jesus Christ of Latter Day Saints on Post Office Road in Lucerne Valley.