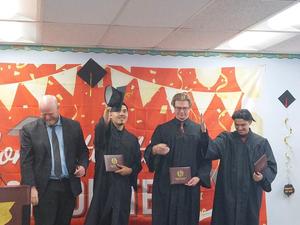 Four Mountain View High School students, all with personal stories of how they buckled down and met the challenge, graduated with grade point averages of 3.6 or higher on Friday, May 20th with friends and family members cheering them on. (May 21, 2022) Superintendent Peter Livingston presents the Mountain View High School 2022 graduating class.
Four Mountain View High School students, all with personal stories of how they buckled down and met the challenge, graduated with grade point averages of 3.6 or higher on Friday, May 20th with friends and family members cheering them on.
Jerimiah Espinoza, Osiris Perez, Wyatt Perry and Alex Ramos each received their diplomas in a packed multi-purpose room. Teacher Victoria Kessler, who also serves as the school’s administrative designee, presented the class with Superintendent Peter Livingston accepting the class and LVUSD Board of Trustees member Jim Harvey confirming the class. Alternative Education Assistant Lori Herriman also assisted in the ceremony.
“You’ve come a long way and made some really big efforts,” Ms. Kessler told the graduates, adding that their 3.6 GPAs meant they were honor roll level. “This is one of my most favorite events of the year,” Superintendent Livingston said. “Graduating allows them to do whatever they want to do next.”
David Rib, Environmental Manager at Mitsubishi Cement Corporation, presented Wyatt, who graduated two years earlier, with a MCCEF Scholarship of $2,000. The advanced skiing graduate, who has his sight set on becoming an electrical engineer, can have the scholarship renewed for up to four years as he continues his college pursuits. “We wanted to make sure we helped you on the way,” Mr. Rib said.
Wyatt, who won (lost?) a game of rock, paper, scissors with the other graduates, gave his speech first. He talked about how people can change over time. He too changed and reached for the stars — with the help of his family and others who made a difference.
“I encourage you to rise to the challenge, take action, put forth your best effort and pursue academic growth the rest of your life.”
Jerimiah thanked his family for being there when it counted. Specifically he thanked his brothers, his mother, father and grandmother. He called his brothers his best role models and “his heroes.” He said his mom has “always been his No. 1 supporter.” His father encouraged him to be strong and make the right decision. His grandmother was “the most kind-hearted, loving, wisest person I know.” When Jerimiah came to Mountain View he started with only half a credit. By the end of the year he had complete 174 credits. “I really grinded my a— off.”
Alex thanked the family members for being there. “Getting here was hard,” he said. “I made some mistakes.” He wasn’t motivated until he realized how close he was to completing his degree. “Never feel comfortable where you are. Keep pushing instead of staying in one position. You might be surprised.”
Following the speeches, Ms. Kessler and Ms. Herriman gave personalized gifts to each of the graduates to laughs and cheers.
The Lucerne Valley High School Cadet Corps presented the colors and cadet Sgt. Herriman led the Pledge of Allegiance. Kevin Barda serves as the school’s academic counselor, Vici Miller is the Student Service Educational Services Coordinator and Jessica Haecker the the lead SAI Teacher  of the Middle High School.