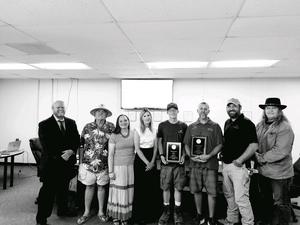 Teacher/coach Christopher Klinger and new Maintenance and Operations team member Bradley Strain were named the school district’s Employees of the Month for August at Thursday’s meeting of the Board of Trustees.
Mr. Klinger and Mr. Strain were presented their awards by Superintendent Peter Livingston and congratulated by the school board.

“Chris has been working diligently this summer preparing his student-athletes for the upcoming football season as he has returned as the Mustang head coach,” said Mr. Livingston, quoting Mr. Klinger’s supervisor. “By day, Mr. Klinger serves as a member of the LVMHS teaching staff and has taught middle school math and science, physical education, and biological sciences. Mr. Klinger is a leader in the classroom, on the foothill field, and in the community. Many of you saw Chris deliver a heart-felt eulogy at Kayden Davis’s memorial service. It is obvious that Mr. Klinger has impacted the lives of many Lucerne Valley students.”

“Brad has been an excellent addition to the Lucerne Valley Unified School District Maintenance and Operations team. He has brought electrical expertise, HVAC system knowledge, specialized training and tremendous knowledge to the department. Brad has been excelling at his day-today performance on the job since he came on board last November. He has brought new and innovative ideas to the team and participates in planning sessions. Bradley is a team player and always willing to go above-and-beyond.”
Assistant Superintendent Nate Lambdin describes Brad as “a hard-working, committed individual who is always willing to do whatever it takes to get the job done.” Later during Thursday’s board meeting, longtime board member Tom Courtney said, “We got Brad. That’s the deal of the century.”