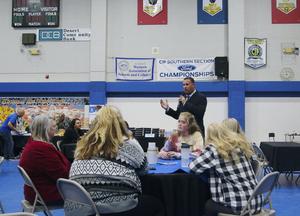 WASC visitors impressed with LVMHS students, staff and campus.
By Peter Day
LVUSD Social Media
The Sgt. Brian Walker Memorial Gymnasium was ready for guests, but it wasn’t for a visiting sports team playing our Mustangs. A number of tables with dinner place-settings were placed for families and special attendees — a small team of representatives from the Western Association of Schools and Colleges (WASC) who came to Lucerne Valley Middle High School to see if the school is ready for its once-every-six-years recertification.
Over the course of several days, the four WASC members — all educators from several Southern California school districts — were given campus tours led by FFA leadership, had classroom visits, and met with school administrators and others. The dinner on November 7th presented the team with the opportunity to meet some of Lucerne Valley’s most involved parents and hear from Principal/Assist. Superintendent Nate Lambdin, all while enjoying a dinner from Cracker Barrel.
The school has made numerous improvements in recent years. They include:
• 12 new buildings
• Internet upgrade to 10G capability
• New restrooms and concession stand in the sports area
• New HVAC units installed
Student and Community engagement activities include:
• Helping Hands hours
• Student volunteers with the Lone Wolf Colony East and Halloween events
• CTE participation
• AVID Toy Drive and MS ASB Food Drive
• Fall Festival
• LVEDA Meetings
• VFW participation
• Roadrunners events
• Pulse Publication student articles
• Mitsubishi Cement Corporation Education Foundation involvement
Other recent improvements include a host of curriculum and instruction and Social Emotional Supports implementations.
Mr. Lambdin, who has served as a WASC team leader for a number of years, shared an update with members of the school district’s Board of Trustees on November 10th.
“Probably the biggest event in a high school principal’s career is the WASC accreditation process,” Mr. Lambdin said. “As a principal I’ve had great visits, but this visit was among the best that I’ve ever been part of.”
The WASC team noted more than 33 strengths. They recognized the school’s clear mission and vision. “Everything from governance to school culture was in there,” he said. The visitors also noted that several school board members were present during the visit.
“It was by far an outstanding experience. Our staff is fantastic.” But, the principal added, “We still have work to do.”
The WASC team’s final report is expected in early 2023.