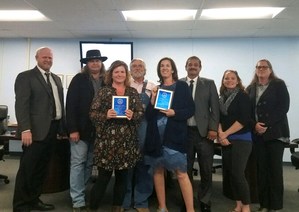 Superintendent Peter Livingston presents awards during regular monthly meeting of the Board of Trustees.
Kindergarten teacher Christine Fuller and bus driver Lisa Redding have been named Employees of the Month for the Lucerne Valley Unified School District. The two were presented with their awards by Superintendent Peter Livingston during the April Board of Trustees meeting on Thursday, April 12.
Named the Certificated Employee of the Month for April, Christine Fuller has been with the school district for more than 10 years. “Few realize the importance that kindergarten sets for school success,” according to an award nomination letter read by the superintendent. “Some students enter school with no experience of school at all. It becomes the role of the kinder teacher to set the tone and prepare students for school success.”
That’s why Christine Fuller and other dedicated Lucerne Valley Elementary School kindergarten teachers play such an important role. Moreover, this year there have been some students that Ms. Fuller has had to focus on and offer support above and beyond the call of duty to ensure success. The teacher’s care and guidance has resulted in dramatic, positive changes in students.
Lisa Redding was given the Classified Employee of the Month award for April for her dedication to serving district students and willingness to step up and take students to games and field trips when others were unavailable.
“Lisa is firm, fair and consistent on her bus with all students,” Mr. Livingston said. “She sets high expectations in order to ensure our students have a safe and secure trip to an from school. Lisa is the first employee her riders see during the day and also the final one off the bus. Her job is valued by the district and her work is appreciated.”
The awardees were congratulated by members of the Lucerne Valley USD's governing board: Jim Harvey (board president), Tom Courtney, Carmen Fox, Ruben Medina and Jessica Risler.