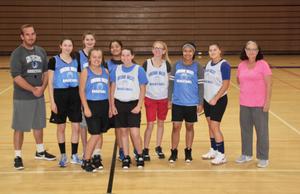 Boys basketball will begin its season on Monday, November 12; soccer gets underway on November 15.
By LVUSD Staff
With fall sports competition all wrapped up, Lucerne Valley’s winter sports program is getting ready to start 2018 competition.
Whether high school or middle school, nearly all teams are in a rebuilding mode. As a result, predicting win-loss records is more art than science. With lots of young, undeveloped talent — and some uncertain variables — there could be happy surprises this 2018-19 winter season. Moreover, the Lucerne Valley Middle High School coaches see the season as a time for laying groundwork future successes.

“We will be young, but we have some great talent in these kids,” says head coach Brandon Barkley, who also serves as the school’s athletic director.  “We should be competing for a league title this year, and with only two seniors on the team, be even better next year.”
A super sophomore class consisting of Omar Orozco, Omar Soto, and Tommy Orozco is expected to take giant leaps this year and help with scoring the team lost after scoring guard Luke Vanderhayden graduated in June. Boys basketball also has one of the biggest variables: the uber talented forward, Donovan Moncrief.
“Hopefully we have Donovan coming back to play for us,” Coach Barkley said. “He is supposed to start school here again soon.” If the 6’3” senior chooses to attend Lucerne Valley High School, he could build on his awe-inspiring 2017-18 season when he scored an average 15.7 points per game to go with 12.7 rebounds.
“Donovan could be one of the greatest players the boys basketball team has seen,” according to Barkley.
Lucerne Valley boys varsity basketball travels to El Monte for a 6 p.m. game on Monday, November 12. The team is planning on competing in the Woodcrest Christian Tournament that runs from November 15-17.

The girl’s team also is young with only two seniors on the team, and one is brand new to the sport of basketball.
“This team is returning almost everyone from last year, which means everyone should be developing,” Coach Barkley said.
Led by junior Brenda Almonte, Barkley said the team will have its ups and downs but this will be another developing team that will be ready for league competition this year, as well as next.
Girls basketball hosts Silver Valley at home on Wednesday, November 14 at 5:30 p.m. JV plays at 4 p.m.

Last year, boys soccer only had one senior but still won six games. The 2018-19 boys soccer team still only has a few seniors, but it has many talented juniors and sophomores.
“Our boys soccer team looks to improve on their wins, and first-year coach Hugo Hernandez is reaching for double digit wins this year,” Coach Barkley said. The soccer team has a chance to qualify for the C.I.F. playoffs either this year or next. “I believe this is possible with the talent we have,” he added.
Boys varsity soccer will begin its season on November 15 when it travels to the Academy for Academic Excellence in Apple Valley. Game time is 3 p.m.

Experience should pay off for girls soccer in the 2018-19 season. Last year the team — without any seniors — played a tough schedule. This season, however, the Lady Mustangs have four seniors whose experience and drive could make the difference. Jasmine Villanueva, who has great dedication, good dribbling skills and a solid knowledge about the game, could have a breakout year along with classmates Wendy Smith and Brenda Velador. Goalie Kylie Douglas’s skills have developed, which indicates she will be stopping a lot more shots this season.
“I think our girls may get their first win ever this year,” Coach Barkley predicted.
This is only the third year in LVHS’ 26-year history where the school has had a girls soccer team playing, notes second-year head coach Matthew Roehl.
“Many of our girls first began playing soccer in middle school PE and have never played community recreation soccer or club soccer like so many other girls in neighboring high schools,” Coach Roehl said. “Nevertheless, they fight hard in practice, fully knowing the obstacles ahead of them.”
Joining Coach Roehl as an assistant coach will be his son Nathan Roehl, who played high school soccer at Granite Hills High School.
Girls soccer will host AAE at 3 p.m. on November 15.

Second-year wrestling head coach Rene Jaime sees the 2018-19 season as a time for growth with only one returning wrestler from last year. Despite the young team, he sees good things for the team.
“My goal for the team is to have them progress as the season goes along and to get most of them to qualify for the CIF individual championship tournament,” Coach Jaime said. “As a full team I expect us to compete for the league championship and to win most if not all of our league meets.”
Coach Barkley noted that multi-sports star Isaiah Hernandez, a junior who had a great wrestling season last year, will be looking to continue growing as an athlete and a team leader. He could qualify for CIF and lead the team for the next two years.
Mustang wrestling will begin competition later in the season. The first scheduled math is a Quad Wrestling Match at Granite Hills High School on Tuesday, December 11 at 5 p.m. The first home competition isn’t until early next year.

With eight games and a scrimmage on their schedule this year the Lucerne Valley Colts boys baseball team will be developing its younger players for the future at the high school level.  Head baseball coach Nathan Heilman, who serves as assistant coach of the Mustang varsity baseball team, is taking the players through the basics.
“The team is working hard to develop the fundamentals of baseball,” Coach Heilman said. “The team is improving each day, and they are starting to gain some confidence.”
A few Colts players from last year are stepping into leadership roles this year, he added.
“Denver Stuap and Jesse Gutierrez have been leading the battery for us. Jose Mendoza has really impressed me as a first time player. He has shown great potential.”
Moreover, Coach Heilman sees how middle school sports is making a difference in young the lives of young student athletes.
“These middle school student athletes are an exceptional group of boys. They are learning to balance their scholastic and athletic responsibilities rather well. I am excited to see where all of our hard work will pay off.”
High school students Mario Sierra and Brody Evans also have been involved as player-coaches.
“Working as player coaches they are demonstrating the commitment it takes for success,” the coach said. “Sometimes even showing up after their own extracurricular sessions, to put in work with their younger counterparts.”
The Colts baseball team will play AAE on Thursday, November 15 at 3 p.m.

Also with eight games this year, middle school softball, under new teacher and coach Bob Kerns (who coached recently at Victor Valley Christian), understands small schools and working with inexperienced players. Both Coach Kerns and new high school softball coach Pat Petrus see a lot of potential among the younger girls.
The coach believes his team should get a few wins this year, and Coach Petrus believes they will be a great hitting team, Coach Barkley said.
“We're working on conditioning, fundamentals, hitting, pitching, fielding, and team work,” Coach Bob said. “At this stage from what I understand this is only the second year from the start of this program and my first with it, so we're are trying to cultivate some players to ready them for the high school ranks.”
The Colts softball team also will play AAE at 3 p.m. on Thursday, November 15.
To see all Winter Sports schedules, click HERE.