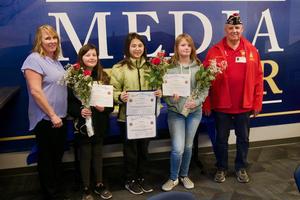 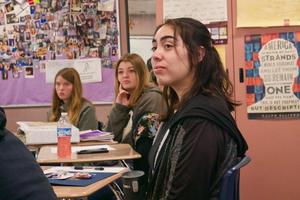 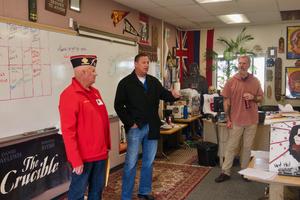 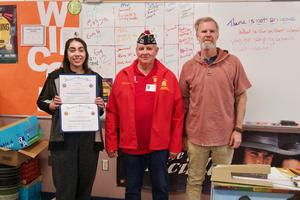 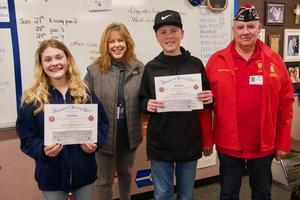 Six Lucerne Valley Middle High School students were presented awards for their winning entries in the Veteran of Foreign Wars’ “Voice of Democracy” and “Patriot’s Pen” contests on Thursday, January 30.
The six — three from the high school and three from middle school — were given their VFW post-level awards along with check prizes from Herald and Karen Keesee of VFW Post 5551 and its auxiliary, respectively.
Jenese Alarcon won the post’s first place award for her Voice of Democracy audio-essay on the theme, “What Makes America Great.” Besides winning first for the local VFW post Jenese won second place in the regional division competition. She was given her awards, which included $200 from the post and $150 from the district, while in Mr. Hood’s high school class.
Lillianna Forsythe and Ian Collins received their second and third place awards, respectively, in Mrs. Schlenz’s English class.
Later, in the school’s new Media Center, the Keesees presented the three “Patriot’s Pen” awards to middle-schoolers Meilani Nguyen (first place), Jadyn Paddack (2nd place) and Rylee Giles (3rd place).
According to the VFW, VFW’s Voice of Democracy audio-essay program, which was established in 1947, provides high school students with the unique opportunity to express themselves in regards to a democratic and patriotic-themed recorded essay. Each year, nearly 40,000 9-12 grade students enter to win their share of more than $1.9 million in educational scholarships and incentives awarded through the program.  The national first-place winner receives a $30,000 scholarship paid directly to the recipient’s American university, college or vocational/technical school.
Each year more than 100,000 students in grades 6-8 enter the VFW’s Patriot’s Pen youth essay contest for a chance to win their share of more than $900,000 in state and national awards. Each first-place state winner receives a minimum of $500 at the national level, and the national first-place winner wins $5,000 and an all-expense-paid trip to Washington, D.C.
The essay contest encourages young minds to examine America’s history, along with their own experiences in modern American society, by drafting a 300- to 400-word essay, expressing their views based on a patriotic theme chosen by the VFW Commander-in-Chief.
A native of Oklahoma, Herald Keesee joined the military in 1966 and began in heavy construction transport systems followed by demolition duties. In the 1970s, he performed several duties in the military including serving a drill sergeant and working in “intel.” After retiring from the military, he spent 22 years working at the local Owl Rock plant followed by 15 years at Omya. Upon retirement in 2013, Keesee began volunteering for various community organizations and causes, most notably with the VFW.
Keesee suggested students watch previous award-winning entries on the VFW website. Also, they can keep an eye out for the 2021 theme, which will be announced in May. The VFW Teacher of the Year award contest recognizes three exceptional teachers for their outstanding commitment to teaching Americanism and patriotism to their students. Every year three teachers receive a $1,000 award for professional development expenses and a $1,000 award for his/her school.
LVMHS Principal Nate Lambdin thanked the Keesees and VFW Post 5551 for their contributions to local schools and providing contest opportunities.
“We’re so very, very proud to partner with you,” Lambdin said.
Post 5551 is located at 31861 Highway 18, Lucerne Valley. Thomas Pugliese is post commander, Michael Brown is quartermaster. For more information, call 760-248-7484. To learn more about the national VFW organization, visit www.vfw.org.
———————
PHOTOS BY PETER DAY
Lucerne Valley High School student Jenese Alarcon, left, received VFW Post 5551’s first place award for her “Voice of Democracy” entry. She also was named the VFW’s district’s second place award winner and won a total of $350. Joining Jenese are Herald Keesee, center, and her teacher Mr. Brian Hood.
Jenese Alarcon was happily surprised by Herald and Karen Keesee on Thursday to learn she had won the post award.
The three middle school winners were given their awards in the school’s Media Center. Pictured, from left, teacher Cyndie McDonough, winners Rylee Giles, Meilani Nguyen and Jadyn Paddack. Herald Keesee, of VFW Post 5551, presented the awards.
With English teacher Linda Schlenz (second from left) watching proudly, Herald Keesee of VFW Post 5551 presented awards to winners Lillianna Forsythe and Ian Collins.