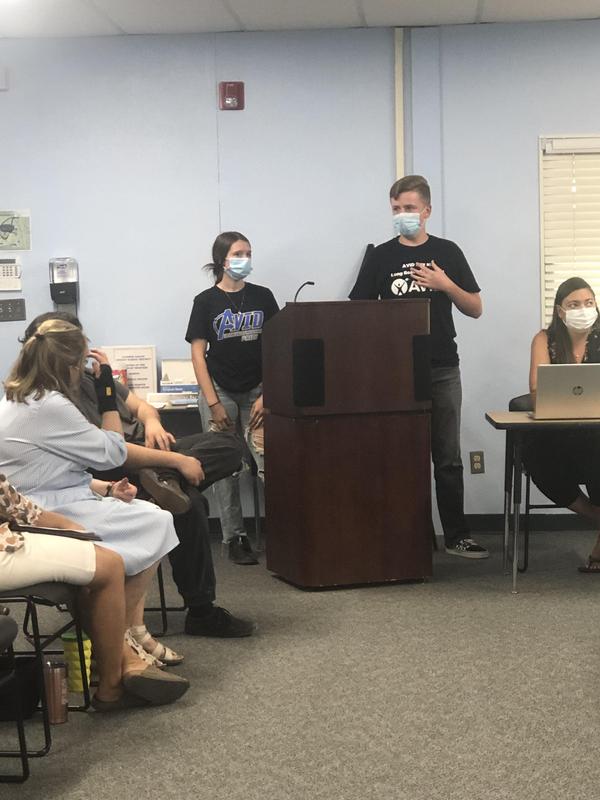 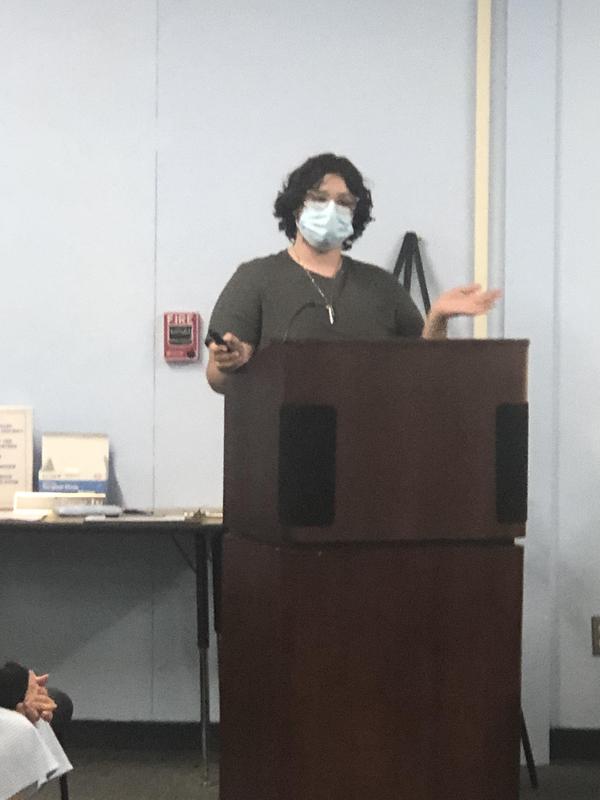 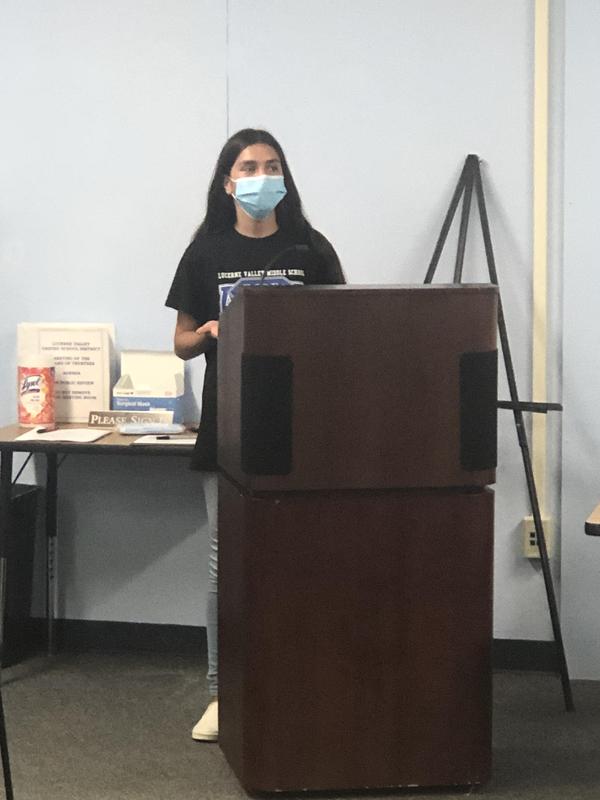 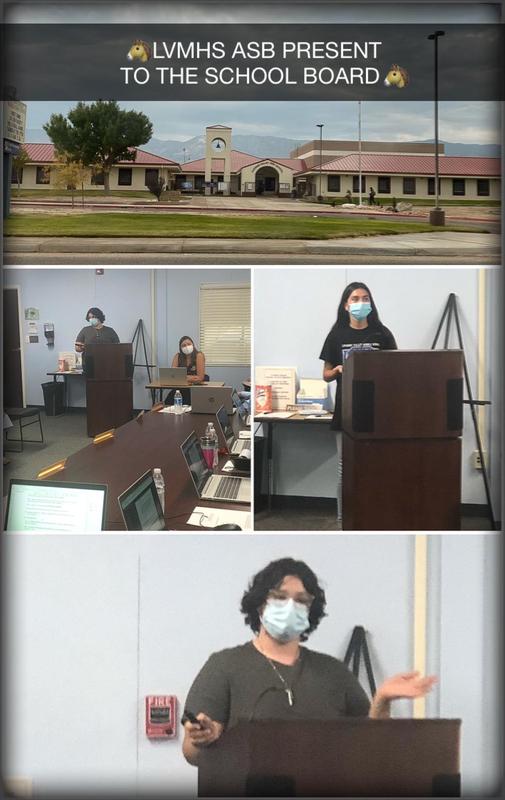 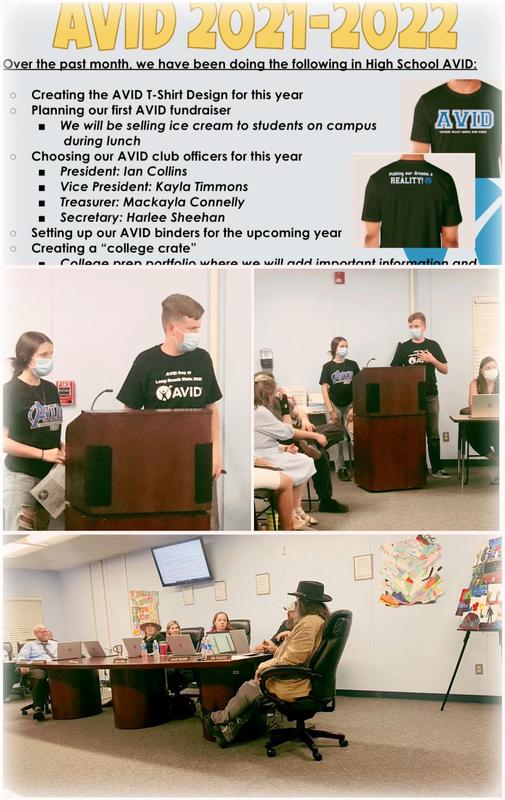 LVUSD Social Media
For the first time in a year and a half, Lucerne Valley student representatives presented activity reports at the monthly meeting of the Lucerne Valley Unified School District’s Board of Trustees on Thursday, Sept. 9.
Reports were given by officers of the Lucerne Valley Middle High School AVID program, LVMHS ASB, and Middle School ASB. No student reports have been presented since spring of 2020, when COVID-19 closed schools throughout the state.
First up was the LVHS AVID President Ian Collins. He gave an update on AVID activities. The officers: President Ian Collins, Vice-President Kayla Timmons, Treasurer Mackayla Connelly, and Secretary Harlee Sheehan.
Next, student representative Thomas Cota gave a presentation on the LVMHS ASB. The LVMHS ASB officers: LVMHS ASB, President is Kevin Angeles, Thomas Cota is vice-president, Andrea Garcia is treasurer , Melody Picco is secretary.
LVMS AVID officers are President Mackayla McGill, Vice-President Sergio Garcia, Secretary Parker Vacca and Treasurer Xorai Perez.

EMPLOYEES OF THE MONTH

Also at the meeting, teacher Liuchoy Hirschhorn and lead custodian Denise Quesenberry were recognized as Employees of the Month. Superintendent Peter Livingston, who presented awards, said they are “two of our better employees” who are always willing to do what’s need and then some.
Mr. Livingston said Mrs. Hirschhorn has worn numerous hats and serves as a mentor to new teachers. School board vice-president Jessica Risler said her son, now a high-schooler, had Mrs. Hirschhorn in second grade. Ever since, he has remembered her class as being pivotal and still has a poem from the class on his wall.
Mr. Livingston said Ms. Quesenberry has “one of the most incredible teams I’ve ever seen,” which is especially evident with the clean classrooms that are so important during the COVID-19 pandemic. “Having a lead like Denise is a big reason for that.”
READ MORE ON THE EMPLOYEES OF THE MONTH.
The district’s Chief Business Official Douglas Beaton presented the district’s Unaudited Actuals. “We just closed the books,” he said.
Going over the specifics with the help of a PowerPoint presentation, Mr. Beaton said the district currently has total revenues of $17.7 million, mostly from state funds, $15.3 million in expenditures, of which about a third is for certificated employees, and have an ending balance of $5 million.
Mr. Livingston explained the district lost out on $500,000 to $600,000 in state funds in relation to its recent student growth. Lucerne Valley and other small school districts not funded for recent growth are hoping for receive compensation after next January’s state budget comes out.
However, the district unexpectedly recently received $1.2 million in Average Daily Attendance funding.
Later in the meeting, the board approved the 2021-22 Unaudited Actuals, which allows Mr. Beaton to submit them to the County of San Bernardino by the Sept. 15 deadline.
Regarding enrollment, the growth is almost literally off the chart, according to Mr. Livingston. The district ended the 2020-21 school year with 890 students. But by the end of August, just weeks after the 2021-22 school year began, the LVUSD had 991 students.
“That’s a 100 student jump,” he said.
The growth is most evident at the elementary school, which is nearing 600 total students.
“The growth is exciting,” Mr. Livingston said. “There are so many new teachers. There’s a level of excitement there.”

The board elected to continue is board chair rotation policy, which was started several years ago after a suggestion by then board president Harvey. Mrs. Risler chaired Thursday’s meeting, new board member Jason Hansen will oversee the October meeting, followed by Harvey in November, Board President Tom Courtney in December and Chelsea LaGrange in January.
“We’re probably the only district in the state to do this,” Mr. Livingston said.
“It’s our commitment to cross training,” Mr. Courtney added.

Principal Ricky Anderson shared what’s going on at the elementary school. The school had a Welcome Back Dance for 6th graders, the LVES Booster Club will sponsor the annual Fall Festival at the Middle High School, and the school will start up its electives, which were put on hold due to the COVID-19 pandemic. Mr. Anderson also talked about the benefits of a new arrangement for 6th graders to participate in sports at the Middle School. Currently, the LVES fields athletes in cross country and flag football.
An LVES 6th-grader was the leading rusher in the first game of the season last week, Assistant Superintendent Nate Lambdin said to begin his report. He complimented the district’s Maintenance and Operations crew all their hard work. Mr. Lambdin said that after two game cancelations, the Mustang football team will hold its first home game since 2019 when it hosts Lone Pine at 6 p.m. on Saturday, Sept. 18. This will be a “black out game,” he added, with Lucerne Valley supporters encouraged to wear black clothing to show support of their team whose new color is black.
He also talked about next May’s WASC visit. There are many new, positive developments at the Middle High School since the last visit six years ago, said Mr. Lambdin who has worked with WASC for a number of years.
“Thank you to everyone who’s here because you truly care about our kids,” he added.
Teacher Cindy Lazenby reported that the district’s Virtual Academy is going strong and that she and teacher Mary Eller are working especially hard after longtime teachers Chris Pennington and Naomi Oyadomari retired at the end of the 2020-21 school year. Last year, the fledgling program had 70 students shared by the four instructors. Already this year, Mrs. Lazenby, who teaches grades 7-12, and K-6 teacher Mrs. Eller have 46 students.  “It’s going well,” she said.
Lead special education teacher Vici Miller said that the program is busy. “There’s just lots and lots of new students.” She also announced the Lucerne Valley Roadrunners are hosting a LifeStream blood drive in memory of the three girls kills in a tragic car accident and in honor of a survivor who suffered critical injuries in the collision from 10 a.m. to 3 p.m. on September 25 at the LV. Senior Center.

Also during the meeting, the school board approved resolutions for several middle school teachers to teach specific subjects. Teachers include Cynthia McDonough, Matthew Roehl and Daniel Lyon.
In the Discussion/Action segment, the board approved the adoption of history and Spanish textbooks, made the determination that each student is provided with sufficient textbooks and instructional materials, approved a variable term waiver for English Learner instruction for Steven Gaskell to teach Public Safety CTE courses, approved Cindy Lazenby and Mary Eller as the Virtual Academy’s principal designees, approved the Adult Education Course List, and several other similar actions.