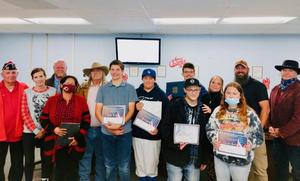 Landon Lindner, who first place from the VFW Post 5551 in the Voice of Democracy competition, receives his award and $300 during the December 16th meeting of the Lucerne Valley USD Board of Trustees. Photo by Peter Day
LVUSD Social Media
Staff Report
Herald and Karen Keesee of the Veterans of Foreign Wars Post #5551 presented the awards for the annual Voice of Democracy and Patriot’s Pen competitions during the December meeting of Lucerne Valley Unified School District’s Board of Trustees. Altogether five Lucerne Valley Middle High School Students received awards, which included checks from $200 to $300.
The high school students competed in the Voice of Democracy audio essay program, this year titled “America: Where Do We Go From Here?” The VFW Post’s first place award, and check for $300, went to Landon Lindner. Taking second place, along with a check for $250, was Jacob Vaughn.
Three local Middle School students were given awards along with checks for writing essays on this year’s Patriot’s Pen a 300-to-400 word theme: “How Can I Be A Good American?”
Kaden Tinder won first place and $300, Brody Geist took second place and received a check for $250, and student Emmalee Hendricks took third place and $200.
Established in 1947, the VFW’s Voice of Democracy audio-essay program provides high school students with an opportunity express themselves in a patriotic-themed recorded essay. Every year, nearly 40,000 students enter to win their share of $2.1 million in educational scholarships. The national first-place winner receives a $30,000 scholarship paid directly to the recipient’s American university, college or vocational/technical school.
The VFW Patriot Pen’s essay competition gives middle school students an opportunity to write essays expressing their view on an annual patriotic theme. The national winners will receive at least $500. The first place national award is $5,000.
In recent years, the Keesees have visited the district to present the awards to the winning students. VFW Post 5551 is located at 31861 State Highway 18 in Lucerne Valley. The VFW, formally the Veterans of Foreign Wars of the United States, is an organization of U.S. military service members.