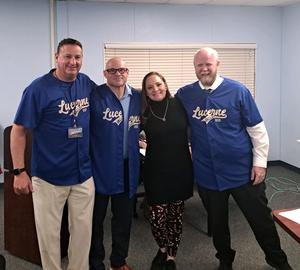 Pictured, from left, LVUSD Assistant Superintendent Nate Lambdin, Mr. Jason Story, Board President Jessica Risler, and Superintendent Peter Livingston. Photo by Doug Beaton
LUCERNE VALLEY, Calif. — The Lucerne Valley Unified School District’s Board of Trustees unanimously approved Jason Story as Principal for Lucerne Valley Middle/High School during its December 15th meeting.
Mr. Story is a Navy veteran who moved into education in the Hesperia USD where he started as a Special Education teacher at Oak Hills and coached baseball among many other things. He won two CIF titles as a baseball coach and led in many aspects of their school. He moved into the Vice Principal position at Oak Hills where he served for five years and then transitioned to Mojave High School as Assistant Principal.
Mr. Story has degrees in Special Education and Psychology and also a Clear Administrative Credential. In Hesperia he was involved in all aspects of the district including helping with facility master plans. He is respected across their district and gets along with staff, students, and parents. One of his strengths is building solid relationships with those he works with.

“Jason is going to be a solid fit for us and has a bright future,” said Superintendent Peter Livingston. “His values align with ours and we found a strong administrator to join our team.”