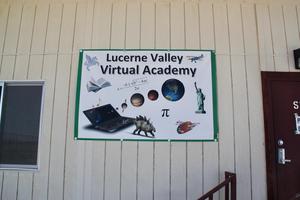 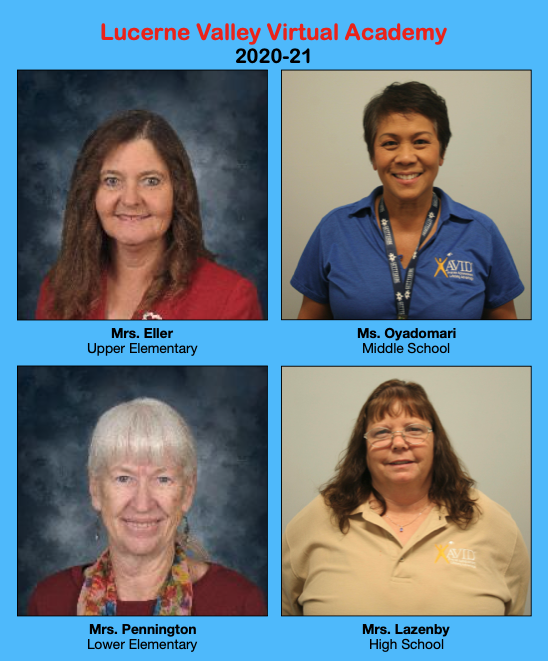 By Peter Day
Looking back on the Lucerne Valley Virtual Academy’s first year, it seems the program that was borne out of necessity is thriving and, hopefully, here to stay. That’s what Mary Eller, one of four Virtual Academy teachers, proposed during her slide show presentation at last Thursday’s regular meeting of the Lucerne Valley Unified School District’s board of trustees meeting.
“It’s our first year, and we’re hoping it’s not our last year,” Mrs. Eller said. “Everything was new for everybody., so we were getting our virtual legs.”
LVVA program teachers: Mrs. Lazenby - High School; Ms. Oyadomari - Middle School; Mrs. Eller - Upper Elementary; Mrs. Pennington - Lower Elementary.
Mrs. Eller shared how one student who came to the academy last September transformed from a reluctant learner testing below grade level to a student who is proud of their work. The student, who receives one-on-one tutoring a few days a week, is looking forward to attending the Virtual Academy next year.
That student isn’t the only one thriving at the Virtual Academy, according to Eller. All Virtual Academy students are enrolled in courses providing curriculum at their independent working level. They are working at grade level in most of their classes and progressing toward grade level in the others.
Mrs. Eller said that nearly one-third of active students have completed an entire year of courses and currently working in next year’s course. More than a quarter of students are one or more years above grade level, and many students who returned to in-person learning are working above grade level and ahead of their non-virtual academy peers. In fact, she added, one high school student is currently working on courses for next year and is concurrently enrolled in a college course.
The Virtual Academy provides opportunities for students who thrive in a different environment than the regular classroom with  individualized curriculum that fits each student’s specific needs and abilities.  Students can work at a higher level in one subject and a slower pace in another. Students can earn credits to graduate early or recover credits they need to make up. Students can be concurrently enrolled in high school and college courses.
Mrs. Eller shared highlights from the Virtual Academy’s first complete year:
August: As students navigated the virtual platform, they work on core assignments through Acellus and Google Classroom. They had Zoom meetings that included participating in daily brain teasers, online learning content, games an short programs. They utilized additional programs such as myLexia, Epic Reading, drawing lessons and Mystery Science. Students went on virtual museum tours, studied architecture around the world, studied stock market investing, and participated in educational games.
September: “In September we were starting to get our legs,” Mrs. Eller said. They used the digital platform to expand their horizon. Students learned about states, National Parks and Monuments and state symbols. Then composed Google Slide reports and presented them on zoom.
October: Guest presenter Julie Taylor, a NASA educational liaison, gave a lesson on the Mars “Perseverance” Rover heading to Mars. Students created the rover using Rice Krispie treats and candies as they learned. Posted lessons included learning about the mission, “7 Minutes of Terror,” Jezero Crater, and the on-board helicopter “Ingenuity.” Students registered to have their names on the 2026 Mars Rover Mission. “We also found a photo-booth app on the NASA website,” the teacher said.
November and December: The program kept things fresh by offering variety. They created green and silver LVVA shirts. They had a bring a friend to zoom day. Held a virtual scavenger hunt. They handed out awards and raffle prizes for academic and work habits. Teachers taught “Christmas Around the World” lessons and students studied the Masters of the art world, which included Ms. O’s daughter Sierra teaching about Van Gogh and guiding students to create their own masterpieces. Mrs. Lazenby’s class studied about Etruscan, Greek, and Roman art and architecture. Students presented slideshows to teach the class what they had learned from further research.
Winter: Virtual Academy students participated in an “Adopt a Cow” program, continued drawing lessons with Mrs. Pennington, made Pi Day pies, studied bats, how snowflakes are formed, and Irish culture and dance. Josh Brander, an engineer, is a Lucerne Valley alumni who was a LVVA guest speaker.
February: Students participated in one-on-one tutoring in real time, they had special assignments to build mastery and virtually attended the Mojave Environmental Educational Consortium MEEC “Maker Faire” and held a Mars Rover Landing Watch Party on February 18 with guest teacher Julie Taylor. They held the “Egg Drop Challenge” in which students engineered a device that protects a raw egg in an 8-foot drop. They tested and incorporated improvements and then competed in various categories such as smallest, lightest, speed reduction, mechanical, most creative egg drop.
Spring: The Virtual Academy guest speaker program continued with Dental Office Manager Stephanie Cervantes talking about the many opportunities in the dental field followed by a presentation by former LVES student Jordan Romero, who became the youngest person to climb Mount Everest. Jordan also climbed the Seven Summits. Fifty-six people participated via Zoom in Jordan’s presentation. Most recently TV writer Calvin Brown shared his expertise and and vast experience in a Zoom presentation for Virtual Academy students.
Summer: Even when school isn’t in session students will have a chance to continuing learning with a sunflower growing competition through the summer. Prior end of school the Lucerne Valley Virtual Academy community will hold an awards event.

Following Mrs. Eller’s presentation, Superintendent Peter Livingston commended the teachers and students. He also expressed his view that such a program provides families with an additional choice.
“Year one of a program like that is a tremendous first step,” Superintendent Peter Livingston said. “It speaks to school choice. Every school should be offering something like this, I think. Great job to Mary, Cindy, Chris and Naomi for taking this on and running with it.”